Class 9 Social Science Sample Papers 2022-23 have questions from all four books. These are History, Geography, Political Science and Economics. Same as class 10, you will find both MCQs and descriptive questions in class 9 social too. If you deeply analyze the question paper, you will conclude that most of the questions are from NCERT textbooks only. So, if you are preparing good quality notes for class 9 SST, you will definitely have better scores in exams. 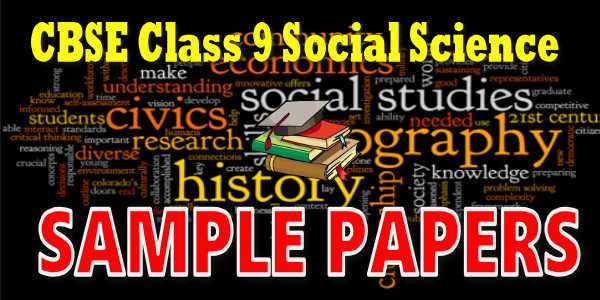 As you know, CBSE does not release model papers for class 9th, but issues only chapter-wise weightage. Hence, we are providing you these model question papers for class 9 Social Science as per the new marking scheme and blueprint released by CBSE. These Sample Papers are available for free download on the myCBSEguide app and website in PDF format. We are also sharing CBSE marking scheme and blueprint along with the Sample Papers. This helps students to find answers to the most frequently asked questions.

This sample question paper and the actual exam question paper will have a similar format. Therefore, you must study the pattern of questions sincerely and practice them as much as possible.

Marking Scheme for the Class 9 exam