CBSE Question Paper 2017 Class 12 Political Science conducted by Central Board of Secondary Education, New Delhi in the month of March 2017. CBSE previous year question papers with the solution are available in the myCBSEguide mobile app and website. The Best CBSE App for students and teachers is myCBSEguide which provides complete study material and practice papers to CBSE schools in India and abroad.

1. State any one special feature of Indo-Russian friendship.

2. Which one of the following was a part of its global war on terrorism by the U.S.?

4. What has been the ideology of left parties in India?

5. How far is the demand for reservation beyond SCs, STs, and OBCs justified?

6. Starting in the 1960s, the two superpowers signed which two significant agreements to control arms?

7.  Assess the commonly agreed upon two goals visualized by the Indians during the national movement which have been fulfilled after independence.

9. In your opinion, was Anandpur Sahib Resolution a plea for strengthening federalism or a plea for the separate Sikh nation?

10. Assess the role of democratic negotiations in responding to regional aspirations.

12. What is meant by alliance building as a component of traditional security policy? State its advantages.

13. Highlight any four negative consequences of globalization for the people of India.

14. Explain the circumstances that led to the accession of Hyderabad to India.

15. How did the methods of voting in free India go on changing from time to time till day? Explain the reasons also.

16. Analyze any four factors responsible for the downfall of the Janata Government in 1979.

17. Read the following passage carefully and answer the questions that follow:

In the event of a nuclear war, both sides will be so badly harmed that it will be impossible to declare one side or the other as the winner, even if one of them tries to attack and disable the nuclear weapons of its rival, the other would still be left with enough nuclear weapons to inflict unacceptable destruction. Both sides have the capacity to retaliate against an attack and to cause so much destruction that neither can afford to initiate war. Thus, the cold war – in spite of being an intense form of rivalry between great powers – remained a ‘cold’ and not hot or shooting war. The deterrence relationship prevents war but not the rivalry between powers.

(i) Why did an intense rivalry between the superpowers remain a cold war only?

(ii) Why can’t a nuclear war between the two nuclear powers be decisive?

(iii) Explain the logic of ‘deterrence’.

18. Read the passage given below carefully and answer the questions that follow:

Despite the mixed record of the democratic experience, the people in all these countries of South Asia share the aspiration for democracy. A recent survey of the attitudes of the people in the five big countries of the region showed that there is widespread support for democracy in all these countries. Ordinary citizens, rich as well as poor and belonging to different religions, view the idea of democracy positively and support the institutions of representative democracy. They prefer democracy over any other form of government and think that democracy is suitable for their country. These are significant findings, for it was earlier believed that democracy could flourish and find support only in prosperous countries of the world.

(i) Assess the popularity of representative democracy.

(ii) Analyze the reasons for the widespread support for democracy in the five big countries of South Asia.

(iii) How far do you agree with the statement that democracy can flourish and find support only in prosperous countries?

19. Read the passage given below carefully and answer the questions that follow:

Movements are not only about collective assertions or only about rallies and protests. They involve a gradual process of coming together of people with similar problems, similar demands, and similar expectations. But then movements are also about making people aware of their rights and the expectations that they can have from democratic institutions. Social movements in India have been involved in these educative tasks for a long time and have thus contributed to the expansion of democracy rather than causing disruptions.

(i) Mention any one right granted to the people of India as a result of any movement.

(ii) How far do you agree that social movements have contributed to the expansion of democracy rather than causing disruptions?

(iii) What is the relationship between the movements and the democratic institutions? 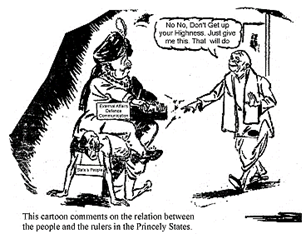 (i) Identify and name the leader shown on the right in the cartoon.
(ii) What type of relationship does the cartoon indicate between the people and the ruler?
(iii) In your opinion, how successful was the approach adopted by the leader on the right to solve the issue of Princely States?

Note: The following question is for visually impaired candidates only in lieu of

Q. No. 20: Answer the following questions:

20.1 Name the Deputy Prime Minister in the first Council of Ministers under Jawaharlal Nehru.

20.2 Before signing the Instrument of Accession with the Indian Government, what assurance was given to the Maharaja of Manipur?

20.3 Which section of the people in Hyderabad rose against the Nizam and why? 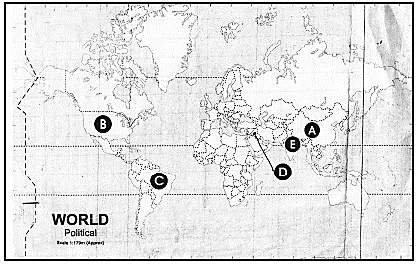 In the given political outline map of the world, five countries have been marked as  A, B, C, D, and  E . Identify these countries on the basis of information given below and write their correct names in your answer book along with their respective serial number of the information used and the concerned alphabets as per the

(i) The country where ‘Earth Summit’ was held in June 1992.
(ii) A leading contributor to greenhouse gas emissions.
(iii) A country is known for its anti-dam pro-river movements.
(iv) A country exempted from the requirement of the Kyoto Protocol.
(v) The second largest producer of crude oil in the world.

Note: The following question is for the Visually Impaired candidates only, in lieu of

Q. No. 21: Answer the following questions:

21.3 Which country mainly advocated the view that the major responsibility of curbing gas emissions rests with the developed countries?

21.4 Which country from North America is known for its forest movements?

21.5 Mention the South American country which is facing enormous pressure due to deforestation.

22. How did India play a crucial role in the Non-aligned Movement during the Cold War period? Explain.

Why did the Soviet Union, the second most powerful country in the world, disintegrate? Explain any six reasons.

23“The bedrock of contemporary U.S. power lies in the overwhelming superiority of its military power.” Justify the statement with any three suitable arguments.

Analyze any three major factors responsible for evolving the European Union from an economic union to a political one.

24. Describe any three challenging global issues that can only be dealt with when everyone works together.

What is meant by the traditional notion of internal and external security?

25. Analyze the impact on Sino-Indian relations from 1962 onwards.

How far has India been successful in conducting its foreign policy peacefully and avoiding international conflicts? Explain with the help of examples.

26. Examine the developments that gave rise to the conflict between the Union Government and the Judiciary in India.

Analyze the circumstances that led to the restoration of Congress System after the Party’s split in 1969.

27. Describe the external and internal disputes responsible for making the politics of Jammu and Kashmir continuously controversial.

Describe any three major developments that left a long-lasting impact on the politics of India after the death of Rajiv Gandhi.