CBSE Question Paper 2016 Class 12 Political Science conducted by Central Board of Secondary Education, New Delhi in the month of March 2016. CBSE previous year question papers with the solution are available in the myCBSEguide mobile app and website. The Best CBSE App for students and teachers is myCBSEguide which provides complete study material and practice papers to CBSE schools in India and abroad.

Q1. Which one of the following statements about the Berlin war is false? (1)
(a) It symbolized the division between the Capitalist; and the Communist world.
(b) It was built immediately after the Second World War.
(c) It was broken by the people on 9th November 1989.
(d) It marked the unification of the two parts of Germany.

Q3. Which one of the two is more essential – construction of mega dams or an environmental movement that opposes it and why? (1)


Q4. Which two objectives Jawaharlal Nehru wished to achieve through the strategy of Non-alignment? (1)

Q5. Highlight the most novel aspect of the Chipko Movement. (1)
Q6. Mention any two major military features of the Cold War. (2)
Q7. “The leaders of the newly independent India did Not see politics as a problem; they saw it as a way of solving the problems.” How far do you agree with the statement? (2)
Q8. Match the following: (2)

Q9. While the rest of the country was reorganized on linguistic lines in the 1950s, why had Punjab to wait till 1966? (2)
Q10. How was the reorganization of North-East India completed and by when? (2)
Q11. In which four ways did the new economic policy of China benefit its economy? (4)
Q12. What is Amnesty International? State its main functions. (4)
Q13. What are ‘global commons’? Why is it said that international cooperation over the global commons is not easy? (4)
Q14. What distinguished the dominance of the Congress Party in India from other examples of one party dominance in other countries? Explain. (4)
Q15. Critically examine the major outcomes of the Indian model of the mixed economy. (4)
Q16. How did Janata Party make the 1977 elections into a referendum on the Emergency imposed in 1975? Explain. (4)
Q17. Read the passage given below carefully and answer the following questions;
Each of these countries was required to make a total shift to a capitalist economy, which meant rooting out completely any structures evolved during this period. Above all, it meant that private ownership was to be the dominant pattern of ownership of property. Privatization of state assets and corporate ownership patterns were to be immediately brought in. Collective farms were to be replaced by private farming and capitalism in agriculture. This transition ruled out any alternate or ‘third way’.
(i) Name any two countries which were required to make a total shift.
(ii) Why were the collective farms to be replaced by private farming?
(iii) Since the ‘third way’ had been ruled out, what were the only two ways of controlling the economy? (5)
Q18. Read the following passage carefully and answer the following questions:
At the most simple level, globalization results in an erosion of state capacity, that is, the ability of government to do what they do. All over the world, the old ‘welfare state’ is now giving way to a more minimalist state that performs certain core functions such as the maintenance of law and order and the security of its citizens. However, it withdraws from many of its earlier welfare functions directed at economic and social well-being. In place of the welfare state, it is the market that becomes the prime determinant of economic and social priorities.
(i) What does the words ‘erosion of state capacity’ imply? Explain with the help of an example.
Q19. Read the following passage carefully and answer the following question:
When India conducted its first nuclear test, it was termed as the peaceful explosion. India argued that it was committed to the policy of using nuclear power only for peaceful purposes. The period when the nuclear test was conducted was a difficult period in domestic politics. Following the Arab-Israel War of 1973, the entire world was affected by the Oil Shock due to the massive hike in the oil prices by the Arab nations. It led to economic turmoil in India resulting in high inflation.
(i) When did India conduct its first nuclear test and why?
Q20. Study the cartoon given below and answer the following questions: (5) 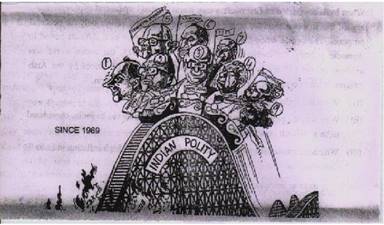 (i) Identify any four national leaders from the above cartoon and mention the serial number of each.
(20.1) Which party had won the maximum number of seats in Lok Sabha Elections of 1984 and under whose leadership?
(20.2) What was the most controversial decision taken by the National Front Government in 1990?
(20.3) Which Prime Minister started the new economic reforms and what was its outcome?
Q21.

In the given political outline map of South Asia, five countries have been marked as (A), (B), (C), (D) and (E). Identify them on the basis of the information given below and write their correct names in your answer book along with their respective serial number of the information used and the concerned alphabets as per the following format;

(i) An important country but it is not considered to be a part of South Asia.
(ii) The country has a successful Democratic System.
(iii) This country has had both Civilian and Military rulers.
(iv) This country had a Constitutional Monarchy.
(v) An Island nation which was a Sultanate till 1968.
(21.1) The expression ‘South Asia’ usually includes which countries?
(21.2) Which two countries of South Asia have successfully operated the democratic system?
(21.3) Write the full forms of SAARC and SAFTA.
Q22. Highlight any three positive and three negative features each of the Soviet System in the Soviet Union. (6)

How far it is correct to say the international alliances during the Cold War era were determined by the requirements of the superpowers and the calculations of the smaller states? Explain.
Q23. Analyze the three different views within India about the type of relationship India should have with the United States of America. (6)

Evaluate any three major factors responsible for making the European Union a political force from being an economic force.
Q24. Describe any three international challenging issues that can only be dealt with when all the countries work together. (6)

What is meant by the traditional notion of external security? Describe any two components of this type of security.
Q25.”The accommodation of regional demands and the formation of linguistic states were also seen as more democratic”. Justify the statement with any three suitable arguments. (6)

Examine the different areas of agreement and disagreement with respect to the model of economic development to be adopted in India after independence.
Q26. Analyze the circumstances that favored Indira Gandhi to become Prime Minister after the death of Lal Bahadur Shastri. Mention any four achievements of Indira Gandhi that made her popular as a Prime Minister. (6)

Analyze the circumstances responsible for the declaration of a state of emergency in India on 25th June 1975.
Q27. Describe any six factors which made the farmers’ movement run by Bharatiya Kisan Union as the most successful popular movement. (6)

Which three lessons do we learn from regional aspirations and their accommodation as an integral part of democratic politics? Describe.