CBSE Question Paper 2015 Class 12 Political Science conducted by Central Board of Secondary Education, New Delhi in the month of March 2015. CBSE previous year question papers with the solution are available in the myCBSEguide mobile app and website. The Best CBSE App for students and teachers is myCBSEguide which provides complete study material and practice papers to CBSE schools in India and abroad.

2. What is meant by Hegemony?

3. Which major factor was responsible for the dramatic victory of Indira Gandhi in 1971 elections?

4. Name the three social and political regions of the Northernmost State of India.

5. Why were the seven small states created in North-East India?

6. What is meant by the Cuba Missile Crisis?

7. Suggest any two steps to be taken by the government to check pollution and save the environment.

8. “Welfare State is getting replaced by the market.” Analyze the reason for this change.

Q-9. How did the Sino-Indian conflict affect the opposition also?

Q-10. How did the dominance of the Congress Party in the first three general elections help in establishing a democratic set-up in India?

Q-11. Why did Indian distance itself from the two camps led by the U.S. and the Soviet Union? Explain.

Q-12. Describe any four major developments in Indian politics since 1989.

Q-13. How has the European Union evolved over time from an economic union to an increasingly political one?

Q-14. Explain any two merits and two demerits each of the Green Revolution.

Q-15. Critically evaluate the difficulties involved in implementing the suggested reforms to reconstruct the U.N.

Q-16. Assess any two positive aspects of the Chipko Movement.

Q-17. Read the passage given below carefully and answer the following questions:
The interim government took a firm stance against the possible division of India into smaller principalities of different sizes. The Muslim League opposed the Indian National Congress and took the view that the States should be free to adopt any course they liked. Sardar Patel, India‟s Deputy Prime Minister and the Home Minister during the crucial period, immediately after Independence, played a historic role in negotiating with the rulers of Princely States in bringing most of them into the Indian Union.
(i) Which government has been referred to as the interim government?
(ii) Why did the Muslim League oppose the Indian National Congress?
(iii) What makes the role of Sardar Patel a historic one? Explain

Q-18. Read the passage given below carefully and answer the following questions:
The New Congress had something that its big opponents lacked – it had an issue, an agenda, and a positive slogan. The Grand Alliance did not have a coherent political programme. Indira Gandhi said that the opposition alliance had only one common programme „Indira Hatao‟. In contrast to this, she put forward a positive programme captured in the famous slogan “Garibi Hatao”.
(i) Which Congress is being referred to as „the New Congress‟?
(ii)Highlight any two steps taken by Indira Gandhi to remove poverty.
(iii) How far is it justified to call the „opposition alliance‟ as the „Grand Alliance?

Q-19. Read the passage given below carefully and answer the following questions:
The Cold War was not simply a matter of power rivalries, military alliances and of the balance of power. These were accompanied by a real ideological conflict as well, a difference over the best and most appropriate way of organizing political, economic, and social life all over the world. 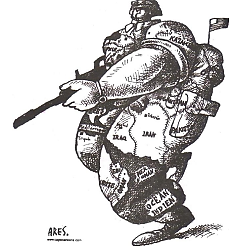 Study the cartoon given above and answer the following questions:
(i) Which country is represented by this mighty soldier?
(ii) Why have the names of so many countries been written on the uniform of the soldier?
(iii) What message does this cartoon convey to the international community? 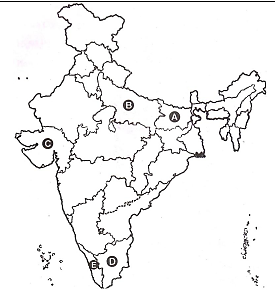 Ans. In the outline political map of India given above, five States have been marked as A, B, C, D and E. With the help of the information given below, identify them and write their correct names in your answer book along with the serial number of the information used and the related alphabet in the map.

(i) The State to which C. Rajagopalachari, the first Indian Governor-General of India, belonged.

(ii) The State where the first non-Congress Government was formed by E.M.S.
Namboodiripad.

(iii) The State to which Rafi Ahmed Kidwai, the Union Minister for Food and Agriculture (1952-54) belonged.

(v) The State which led the country to the White Revolution through Dairy Cooperative Movement.

Note: This question is for the visually impaired candidates in lieu of Q.No.21.
Answer the following questions :
21.1. How many Princely States were there in India at the time of independence?
21.2 When was the State Recognition Commission appointed and what was
its major recommendation?

Q-22. Describe any six criteria for the new membership of Security Council as suggested after 1997.

Q-23. Describe any six factors responsible for the disintegration of U.S.S.R.

Q-25. Examine any three factors responsible for the US hegemony in world politics.

Q-26. authorities ask you to present any three demands on behalf of the farmers. On a priority basis, which three demands will you make? Support your demands with appropriate arguments.

In 2014 elections, people have voted for a stable government at the Centre. Do you think that the era of the coalition has ended? Support your answer with suitable arguments

Q-27. Analyze any three lessons learned from the emergency of 1975.