CBSE Question Paper 2015 class 10 Social Science conducted by Central Board of Secondary Education, New Delhi in the month of March 2015. CBSE previous year question papers with solution are available in myCBSEguide mobile app and cbse guide website. The Best CBSE App for students and teachers is myCBSEguide which provides complete study material and practice papers to CBSE schools in India and abroad.

(i) The question paper has 30 questions in all. All questions are compulsory.

(iii) Questions from serial number 9 to 20 are 3 mark questions. Answer of these questions should not exceed 80 words each.

(iv) Questions from serial number 21 to 28 are 5 mark questions. Answer of these questions should not exceed 100 words each.

(v) Questions number 29 to 30 are map questions of 3 marks each from History and Geography both. After completion, attach the map inside you answer-book.

1. What was the main aim of the French revolutionaries?

What is the meaning of concentration camps?

2. How do minerals occur in sedimentary rocks?

4. How can you say that democracies are based on political equality?

5. Why do political parties involve partisanship?

6. What is meant by double coincidence of wants?

7. Suppose your parents want to purchase Gold jewellery along with you; then which logo will you look for on the jewellery?

8. How does money act as a medium of exchange?

9. How did nationalism develop through culture in Europe? Explain.

How did Paul Bernard argue in favour of economic development of Vietnam? Explain.

11. How did ‘Salt March’ become an effective tool of resistance against colonialism? Explain.

12. Explain the importance of railways as the principal mode of transportation for freight and passengers in India.

13. Why has the ‘Chhotanagpur Plateau Region’ the maximum concentration of iron and steel industries? Analyse the reasons.

14. How can solar energy solve the energy problem to some extent in India ? Give your opinion.

15. ‘‘Dynastic succession is one of the most serious challenges before the political parties.’’ Analyse the statement.

16. How is democracy accountable and responsive to the needs and expectations of the citizens? Analyse.

17. ‘‘A challenge is an opportunity for progress.’’ Support the statement with your arguments.

18. Why is modern currency accepted as a medium of exchange without any use of its own? Find out the reason.

19. ‘‘Foreign trade integrates the markets in different countries.’’ Support the statement with arguments.

20. Explain with an example how you can use the right to seek redressal.

21. Describe any five steps taken by the French Revolutionaries to create a sense of collective identity among the French people.

Describe any five steps taken by the French for the development of the ‘Mekong Delta Region’.

22. Explain the attitude of the Indian merchants and the industrialists towards the ‘Civil Disobedience Movement’.

23. What is the manufacturing sector? Why is it considered the backbone of development? Interpret the reason.

24. Which is the most abundantly available fossil fuel in India? Assess the importance of its different forms.

27. How do banks play an important role in the economy of India? Explain.

28. ‘‘Globalisation and greater competition among producers has been advantageous to consumers.’’ Support the statement with examples.

29. Three features A, B, and C are marked on the given political outline map of India (on page 9). Identify these features with the help of the following information and write their correct names on the lines marked in the map:

A. The place where the Indian National Congress Session was held.

B. The place associated with the Peasant’s Satyagraha.

C. The place related to calling off the Non-Cooperation Movement.

Note:  The following questions are for the Visually Impaired Candidates only, in lieu of Q. No. 29 :

(29.1) Name the place where the Indian National Congress Session was held in December 1920.

(29.2) Name the place associated with the movement of Indigo Planters.

(29.3) Name the place related to the Satyagraha of peasants in Gujarat.

30. (30.1) Two features A and B are marked on the given political outline map of India (on page 11). Identify these features with the help of the following information and write their correct names on the lines marked in the map:

B. Terminal Station of East-West Corridor

(30.2) On the same political outline map of India, locate and label the following:

Note:  The following questions are for the Visually Impaired Candidates only, in lieu of Q. No. 30:

(30.1) In which state are Bailadila Iron-ore mines located? 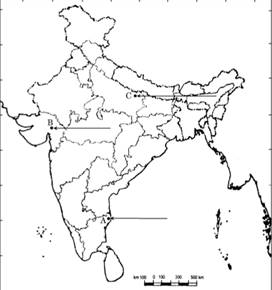