CBSE Question Paper 2014 Class 12 Political Science conducted by Central Board of Secondary Education, New Delhi in the month of March 2014. CBSE previous year question papers with the solution are available in the myCBSEguide mobile app and website. The Best CBSE App for students and teachers is myCBSEguide which provides complete study material and practice papers to CBSE schools in India and abroad.

2. Under which plan did the U.S.A. extend financial support for reviving Europe’s economy after the Second World War?

3. Who is the present Secretary-General of the United Nations?

5. Name the leader who played a historic role in negotiating with the rulers of princely states to join the Indian Union.

6. Which political party laid emphasis on the idea of one country, one culture, and one nation?

7. In which year was the fifth general election to Lok Sabha held?

8. Mention the main reason for the defeat of Congress Party in the elections of 1977

9. Who represented Congress (O) and Congress (R) after the split of the Congress party?

10. which student’s group led the anti-foreigner movement in Assam?

12. State any two features of the Soviet System.

13. Which two differences between India and China led to an army conflict 1962?

14. List any four principal organs of the United Nations

15. Suggest anyone effective step which would limit war or violence between countries.

16. Differentiate between the main objectives of the First and the Second Five Year Plans.

17. Highlight any two features of the ideology of Bharatiya Jana Sangh.

18. What is meant by Non-alignment?

19. What was the main demand of the Chipko Movement?

20. Who was the chairperson of Mandal Commission? State any one recommendation

22. Study the cartoon given below carefully and answer the questions that follow: 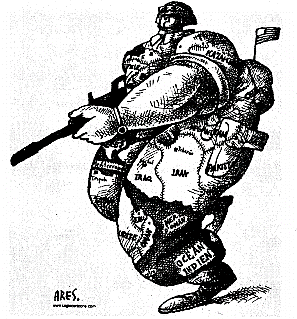 (a)The mighty soldier with weapons represents which country?
(b)Why do the names of various countries appear on his uniform?
(c)What important message does the cartoon convey to the World?

Note: The following questions are for Blind candidates only, in lieu of e. No. 22:
(i) Define hegemony.
(ii) Differentiate between the hegemony of hard power and the hegemony of soft power

23. What is meant by the ASEAN way? Mention any two of its objectives

24. Explain any two points of conflict between India and Bangladesh.

25. As decided by the member States in 2005, highlight any four steps to make the United Nations more relevant in the changing context

27. List any two merits and two demerits of the Green Revolution. 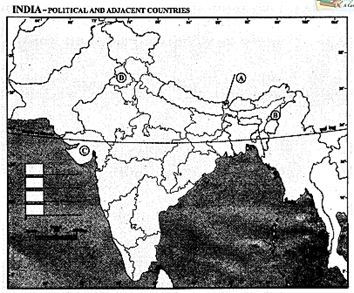 31. In the given political map of India, four places have been marked as A, B, C, D.
Identify them with the help of information given below and write their correct names
in the answer book, along with their serial numbers and the alphabets concerned.
(i) The State associated with Narmada Bachao Aandolan.
(ii) The State which merged with the Indian Union in 1975.
(ii| The State related to ‘Operation Blue Star’.
(iv) The State whose one of the important leader was Lal Denga.

32. Note: The following question is for Blind candidates only, in lieu of Q. No. 30:
(i) Narmada Bachao Andolan is related to which multi-purpose project?
(ii) Name the22″d’State of the Indian Union.
(iii) What was ‘Operation Blue Star’?
(iv) Which non-political organization led an anti-foreigner movement in Assam?

33. What was the Cuban Missile Crisis? Describe its main events.

Explain any three reasons for the disintegration of the USSR’

33. What forced the Union Government of India to appoint the States Reorganisation
Commission in 1953? Mention its two main recommendations. Name any four new
States formed after 1956.

Describe the various steps taken to hold the first general elections in India. How far these elections were successful?

34. Examine t969. the three main reasons responsible for the split in the Congress party during

Evaluate any three consequences of the emergency imposed in 1975.

35. Read the passage carefully given below and answer the questions that follow :
The Assam Movement from 1979 to 19g5 is the best example of such movements against ‘outsiders’. The Assamese suspected that there were huge numbers of illegal Bengali Muslim settlers from Bangladesh. They felt that unless these foreign nationals are detected and deported, the/would reduce the indigenous Assamese into a minority. There were other economic issues too. There were widespread poverty and unemployment in Assam despite the existence of natural resources like oil, tea, and coal. It was felt that these were drained out of the State without any commensurate benefit to the people.
(i) Name the group that led the movement against outsiders in 1979.
(ii) Why did the Assamese seek the detection and deportation of the outsiders?
(iii) what were the economic issues taken up as part of the movement?
This new challenge came to the force in the 1980s, as the Janata experiment came to an end and there was some political stability at the center. This decade will be remembered for some major conflicts and accords in the various regions of the country, especially in Assam, the Punjab, Mizoram and the developments in Jammu and Kashmir.
(i) Explain the meaning of the phrase ‘Janta experiment came to an end.’
(ii) ‘There was some stability at the center’. What does it imply?
(iii) Highlight any two developments in Punjab in the 1980s.