CBSE Question Paper 2014 class 12 History conducted by Central Board of Secondary Education, New Delhi in the month of March 2014. CBSE previous year question papers with the solution are available in the myCBSEguide mobile app and website. The Best CBSE App for students and teachers is myCBSEguide which provides complete study material and practice papers to CBSE schools in India and abroad.

Answer all the questions given below:
1. Mention any two features of the administration system of the Mauryan Empire.
2. ‘By the eleventh century Sufism evolved into a well-developed movement.’ Give any two examples.
3. Why was the colonial government keen on the mapping of Indian cities from the early years? Give any two reasons.

4. How did architectural features of Mohenjo-Daro indicate planning? Support with suitable examples.
5. Who composed the original story of Mahabharata in oral form? Explain any four elements considered by the historians while analyzing the Mahabharata.
6. “Buddha laid stress on right conduct and values.” In the light of the above message, explain his teachings on life.

Answer any one of the following questions:

7. “Domingo Paes has called the Mahanavami Dibba of Vijayanagara Empire as ‘The House of Victory’.” Justify.
8. Describe the life led by the forest dwellers during the Mughal era in 16th 17″ centuries.

Answer any one of the following questions:

9. Critically examine the policies adopted by the Britishers to control Paharias.
10. How did British dispossess Taluqdars of Awadh during 1857? Explain with examples.

11.(11.1) “The colonial cities provided new opportunities for women during the 19th century.” Give two examples.
(11.2) Explain any three values which encouraged women for their empowerment.

12. Explain the role of Panchayats in the Mughal rural Indian society during 16″ 17th’ centuries.

13. “In the history of nationalism, Gandhiji is often identified with the making of a nation.” Describe his role in the freedom struggle of India.

Describe the harrowing experiences of ordinary people during the period of the partition of India.

14. Read the following extracts carefully and answer the questions that follow:

In praise of Samudragupta This is an excerpt from the Prayaga Prashasti:
He was without an antagonist on earth; he, by the overflowing of the multitude of (his) many good qualities adorned by hundreds of good actions, has wiped  off the fame of other kings with the soles of (his) feet; (he is) Purusha (the Supreme Being), being the cause of the prosperity of the good and the destruction of the bad (he is) incomprehensible; (he is) one whose tender heart can be captured only by devotion and humility; (he is) possessed of compassion; (he is) the giver of many hundred- thousands of cows; (his) mind has received ceremonial initiation for the uplift of the miserable, the poor, the forlorn and the suffering; (he is) resplendent and embodied kindness to mankind; (he is) equal to (the gods) Kubera (the god of wealth), Varuna (the god of the ocean), Indra (the god of rains) and Yama (the god of death). ..

(14.1) Who wrote the above Prashasti? State the importance of Prashasti.
(14.2) Mention any three qualities of the ruler described in the excerpt.
(14.3) How far are these values, shown by the rulers, relevant in contemporary society? Explain.

This is an excerpt from the Adi Parvan (literally, the first section) of the Sanskrit Mahabharata, describing why conflicts arose amongst the Kauravas and Pandavas The Kauravas were the sions of Dhritarashtra, and the Pandavas  … were their cousins. Since Dhritarashtra was blind, his younger brother Pandu ascended the throne of Hastinapura … However, after the premature death of Pandu, Dhritarashtra became king, as the royal princes were still very young. As the princes grew up together, the citizens of Hastinapura began to express their preference for the Pandavas, for they were more capable and virtuous than the Kauravas. This made Duryodhana, the eldest of the Kauravas, jealous. He approached his father and said; “You yourself did not receive the throne, although it fell to you, because of your defect. If the Pandava receives the patrimony from Pandu, his son will surely inherit it in turn, and so will his son, and his. We ourselves with our sons shall be excluded from the royal succession and     become of slight regard in the eyes of the world, the lord of the earth !”

(14.1) Explain about the worries of Duryodhana that he expressed to his father.
(14.2) Mention the criteria for becoming king as suggested in the excerpt.
(14.3) Why did the citizens of Hastinapur express their preference for the Pandavas?

15. Here is an excerpt from Ibn Battuta’s account of Delhi, often spelled as Dehli in texts of the period:
The city of Dehli covers a wide area and has a large population … The rampart round the city is without parallel. The breadth of its wall is eleven cubits, and inside it is housing for the night sentry and gatekeepers. Inside the ramparts, there are store-houses for storing edibles, magazines, ammunition, ballistas and siege machines. 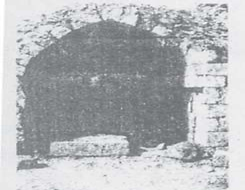 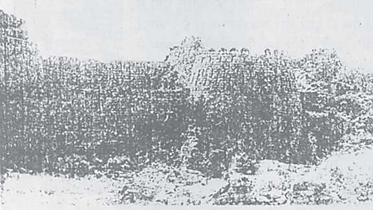 The grains that are stored (in these ramparts) can last for a long time, without rotting … In the interior of the rampart, horseman, as well as infantrymen, move from one end of the city to another. The rampart is pierced through by windows which open on the side of the city, and it is through these windows that light enters inside. The lower part of the rampart is built of stone; the upper part of bricks. It has many towers close to one another. There are twenty-eight gates in this city which are called Darwaza, and of these, the An arch in Budaun Darwaza is the greatest; inside the Mandwi Darwaza there is Tughlakabad, Delhi a grain market; adjacent to the Gul Darwaza there is an orchard … It (the city of Delhi) has a line cemetery in which graves have domes over them, and those that do not have a dome, have an arch, for sure. In the cemetery, they sow flowers such as tuberose, jasmine, wild rose, etc.;
(15.1) Why has Ibn Battuta described Delhi as a vast city?
(15.2) Mention the measures taken to protect Delhi from the invasion during 14t’ century.
(15.3) Why was Ibn Battuta impressed with the architectural features of the city? Explain.

Krishnadeva Raya (ruled 1509-29), the most famous ruler of Vijayanagara, composed a work on statecraft in Telugu known as the Amuktamalyada. About traders, he wrote: A king should improve the harbors of his country and so encourage its commerce that horses, elephants, precious gems, sandalwood, pearls, and other articles are freely imported … He should arrange that the foreign sailors who land in his country on account of storms, illness, and exhaustion are looked after in a suitable manner. Make the merchants of distant foreign countries who import elephants and good horses are attached to yourself by providing them with the daily audience, presents and allowing decent profits. Then those articles will never go to your enemies.
(15.1) Explain the responsibilities of the king mentioned by Krishnadeva Raya.
(15.2) In what ways had Krishnadeva Raya protected articles from going to his enemies?
(15.3) Explain the measures taken by the king to improve the conditions of his country.

The following report, titled ‘The ryot and the moneylender’, appeared in the Native
Opinion (6 June 1876), and was quoted in Report of the Native Newspapers of Bombay:
They (the ryots) first place spies on the boundaries of their villages to see if any government officers come, and to give timely intimation of their arrival to the offenders. They then assemble in a body and go to the houses of their creditors, and demand from them a surrender of their bonds and other documents, and threaten them in case of refusal with assault and plunder. If any Government officer happens to approach the villages where the above is taking place, the spies give intimation to the offenders and the latter disperse in time.
(16.1) Describe how ryots took control over the moneylenders.
(16.2) Explain the measures taken by the ryots to save themselves.
(16.3)  Explain why ryots resorted to robbing the moneylenders.

‘We are not just going to copy’

We say that it is our firm and solemn resolve to have an independent sovereign republic. India is bound to be sovereign, it is bound to be independent and it is bound to be a republic … Now, some friends have raised the question “Why have you not put in the word ‘democratic’ here. ?” Well, I told them that it is conceivable, of course, that a republic may not be democratic but the whole of our past is witness to this fact that we stand for democratic institutions. Obviously, we are aiming at democracy and nothing less than a democracy. What form of democracy, what shape it might take is another matter. The democracies of the present day, many of them in Europe and elsewhere, have played a great part in the world’s progress. Yet it may be doubtful if those democracies may not have to change their shape somewhat before long if they have to remain completely democratic. We are not going just to copy, I hope, a certain democratic procedure or an institution of a so-called democratic country. We may improve upon it. In any event whatever system of government we may establish here must fit in with the temper of our people and be acceptable to them. We stand for democracy. It will be for this House to determine what shape to give to that democracy, the fullest democracy, I hope. The House will notice that in this Resolution, although we have not used the word “democratic” because we thought it is obvious that the word “republic” contains that word and we did not want to use unnecessary words. and redundant words, but we have done something much more than using the word. We have given the content of democracy in this Resolution and not only the content of democracy but the content, if I may say so, of economic democracy in this Resolution. Others might take objection to this Resolution on the ground that we have not said that it should be a Socialist State. Well, I stand for Socialism and, I hope, India will stand for Socialism and that India will go towards the Constitution of a Socialist State and I do believe that the whole world will have to go that way. — Constituent Assembly Debates (Cad), VoLI
(16.1) Explain why Nehru did not mention the word democratic in the resolution.
(16.2) Mention the three basic features of the Constitution given in the above passage.
(16.3) On what kind of socialism did Nehru give stress to?

17. (17.1) On the Political outline map of India, locate and label the following:
(a) Dholavira (b) Lumbini
(17.2) On the same outline map of India, three places related to the Indian  National Movement have been marked as 1, 2 and 3. Identify them and write their correct names on the lines drawn near them.
Note: The following questions are only for the Visually Impaired Candidates in lieu of the Map Question No. 17:
(17.1) Mention any two mature Harappan sites.
(17.2) Mention names of any three important places related to the Indian National Movement. 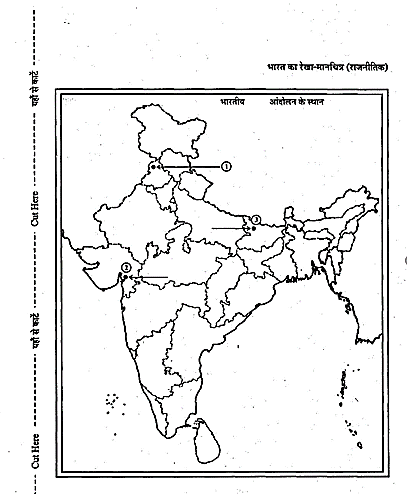