CBSE Question Paper 2014 Class 12 Geography conducted by Central Board of Secondary Education, New Delhi in the month of March 2014. CBSE previous year question papers with the solution are available in the myCBSEguide mobile app and website. The Best CBSE App for students and teachers is myCBSEguide which provides complete study material and practice papers to CBSE schools in India and abroad.

2. Give the meaning of ‘digital divide.,

3. Name the seaports on each end of Suez Canal.

5. Give any two examples of ancient towns of India.

6. Name the country which is the largest trading partner of India.

7. Name the seaport which was constructed to reduce the congestion at Kolkata port.

8. Name the major seaport which was developed just after independence on the western coast of India.

9. What is truck farming?

11.”There is mutual interaction between the elements of Physical Geography and Human Geography.” Support the statement with suitable examples.

13.Study the map given below and answer the questions that follow: 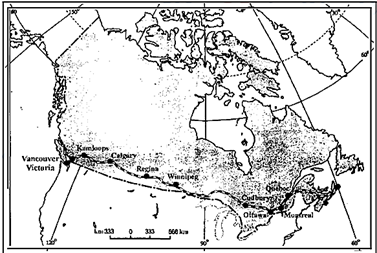 (13.2) Name the terminal station of this railway along the Atlantic Coast.

(13.3) Why is this railway line known as ‘economic artery’ of the country through which it passes?

14. Differentiate between rural and urban settlements of India in three points.

15. State any two characteristics each of the three distinct ‘cropping seasons’ of India.

16. Explain any three main characteristics of mineral resources of India.

17. Describe any three advantages of satellite communication in India.

18. Why is the ‘Urban Waste Disposal’ a serious problem in India? Explain any three reasons.

19.Study the diagram given below, showing the location of an important steel plant of India and answer the questions that follow: 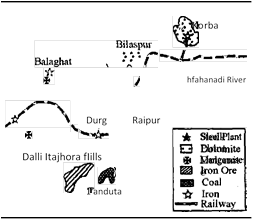 (19.2) Mention the thermal power plant which supplies power to it.

(19.3) Mention the source of water for this plant.

Note: The following questions are for the Visually Impaired candidates only; in

(19.1) which steel plant was established with Russian collaboration in Chhattisgarh?

(19.2) Name the thermal power plant which supplies power to this plant.

(19.3) Mention the source of water for this plant.

20.Analyse the economic and social values of rainwater harvesting.

22. Describe any five characteristics of, Commercial Livestock Rearing, practiced in the  World.

24. Describe any five patterns of ruml settlements in the world on the basis of forms or shapes.

26. (26.1) In the given political outline Map of the World, four features A, B, C, and D have been shown. Identify these features with the help of information given below and write their correct names on the lines drawn near them.

A: An important seaport

B: A terminal station of Australian Trans-Continental Railway

C: An area of subsistence gathering

(26.2) On the given political outline Map of India, locate and label the following with appropriate symbols:

A. The state having highest literacy rate.

B. The leading state in the production of Jute.

Note: The following questions are for the Visually Impaired candidates only; in lieu of

(26.1) Mention an area of subsistence gathering in South America.

(26.3) Which state has highest literacy rate in India?

(26.4) Name the leading state in the production of Jute in India. 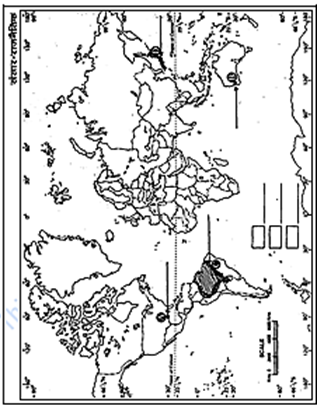 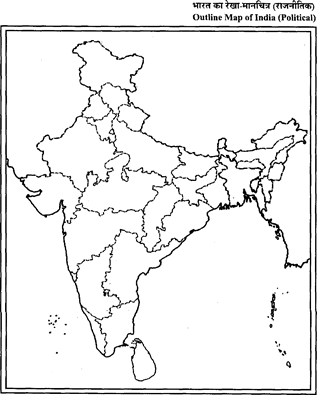