CBSE Question Paper 2014 class 12 Biology conducted by Central Board of Secondary Education, New Delhi in the month of March 2014. CBSE previous year question papers with solution are available in myCBSEguide mobile app and cbse guide website. The Best CBSE App for students and teachers is myCBSEguide which provides complete study material and practice papers to cbse schools in India and abroad.

1. Write the name of the organism that is referred to as the ‘Terror of Bengal’.

2. What are ‘true breeding lines’ that are used to study inheritance pattern of traits in plants?


3. Name any two types of cells which act as ‘Cellular barriers’ to provide Innate Immunity in humans.

4. Mention the type of host cells suitable for the gene guns to introduce an alien DNA.

5. How is ‘stratification’ represented in a forest ecosystem

6. Give an example of an organism that enters ‘diapause’ and why.

7. Identify ‘a’ and ‘b’ in the figure given below representing proportionate number of major vertebrate taxa. 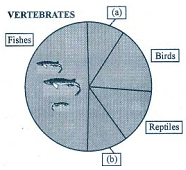 8. State the cause of Accelerated Eutrophication

9. Why do algae and fungi shift to sexual mode of reproduction just before the onset of adverse conditions?

10. A cross was carried out between two pea plants showing the contrasting traits of height of the plant. The result of the cross showed 50% of parental characters.

(i) Work out the cross with the help of a Punnett square.

(ii) Name the type of the cross carried out.

11. How does the gene ‘I’ control ABO blood groups in humans? Write the effect the gene has on the structure of red blood cells.

Write the types of sex-determination mechanisms the following crosses show. Give an example of each type.

(i) Female XX with Male XO

12. (i) Name the scientist who suggested that the genetic code should be made of a combination of three nucleotides.

(ii) Explain the basis on which he arrived at this conclusion.

13. State the disadvantage of inbreeding among cattle. How it can be overcome?

14. Explain with the help of a suitable example the naming of a restriction endonuclease.

15. State how has Agrobacterium tumifaciens been made a useful cloning vector to transfer DNA to plant cells.


16. Construct an age pyramid which reflects a stable growth status of human population.

17. Apart from being part of the food chain, predators play other important roles. Mention any two such roles supported by examples.

18. How are ‘sticky ends’ formed on a DNA strand? Why are they so called?

19. Explain any three advantages the seeds offer to angiosperms.

20. Name and explain the role of inner and middle walls of the human uterus.

21. A colourblind child is born to a normal couple. Work out a cross to show how it is possible. Mention the sex of this child.

Mendel published his work on inheritance of characters in 1865, but it remained unrecognized till 1900. Give three reasons for the delay in accepting his work.

22. Women are often blamed for producing female children. Consequently, they are ill treated and ostracized. How will you address this issue scientifically if you were to conduct an awareness programme to highlight the values involved?

23. (a) Name the tropical sugar cane variety grown in South India. How has it helped in improving the sugar cane quality grown in North India?

24. Why are beehives kept in crop field during flowering period? Name any two crop fields where this is practiced.

25. How did the process of RNA interference help to control the nematode from infecting roots of tobacco plants ? Explain.

26. Study the graph given below and answer the question that follow:

(ii) In the absence of predators, which one of the two curves would appropriately depict the prey population?

(iii) Time has been shown on X-axis and there is a parallel dotted line above it. Give the significance of this dotted line.

28. (a) Coconut palm is monoecious, while date palm is dioecious. Why are they so called?
(b) Draw a labelled diagram of sectional view of a mature embryo sac of an angiosperm.

(a) How is ‘oogenesis’ markedly different from ‘spermatogenesis’ with respect to the growth till puberty in the humans?

(b) Draw a sectional view of human ovary and label the different follicular stages, ovum and Corpus luteum.

29.(a) Explain the process of DNA replication with the help of a schematic diagram.

(b) In which phase of the cell cycle does replication occur in Eukaryotes? What would happen if cell-division is not followed after DNA replication?

(a) Explain Darwinian theory of evolution with the help of one suitable example. State the two key concepts of the theory.

(b) Mention any three characteristics of Neanderthal man that lived in near east and central Asia.

30. (a) Name the technology that has helped the scientists to propagate on large scale the desired crops in short duration. List the steps carried out to propagate the crops by the said technique.

(b) How are somatic hybrids obtained?

(a) Cancer is one of the most dreaded diseases of humans. Explain ‘Contact inhibition’ and ‘Metastasis’ with respect to the disease.

(b) Name the group of genes which have been identified in normal cells that could lead to cancer and how they do so?

(c) Name any two techniques which are useful to detect cancers of internal organs.

(d) Why are cancer patients often given -interferon as part of the treatment ?