CBSE Question Paper 2011 class 12 Physics conducted by Central Board of Secondary Education, New Delhi in the month of March 2011. CBSE previous year question papers with solution are available in myCBSEguide mobile app and cbse guide website. The Best CBSE App for students and teachers is myCBSEguide which provides complete study material and practice papers to cbse schools in India and abroad.

2. Where on the surface of Earth is the angle of dip 90o?

3. A hollow metal sphere of radius 5 cm is charged such that the potential on its surface is 10 V. What is the potential at the centre of the sphere?

4. How are radio waves produced?

6. Two bar magnets are quickly moved towards a metallic loop connected across a capacitor ‘C’ as shown in the figure. Predict the polarity of the capacitor.

7. What happens to the width of depletion layer of a p-n junction when it is (i) forward biased, (ii) reverse biased?

8. Define the term ‘stopping potential’ in relation to photoelectric effect.

is enclosed by a cylindrical surface of radius r and length l, its axis coinciding with the length of the wire. Find the expression for the electric flux through the surface of the cylinder.10. Plot a graph showing the variation of coulomb force (F) versus

; where r is the
distance between the two charges of each pair of charges: (1

11. Write the expression for Lorentz magnetic force on a particle of charge ‘q’ moving
with velocity

in a magnetic field

. Show that no work is done by this force on
the charged particle. 2

A steady current (I1) flows through a long straight wire. Another wire carrying steady
current (I2) in the same direction is kept close and parallel to the first wire. Show
with the help of a diagram how the magnetic field due to the current I1 exerts a
magnetic force on the second wire. Write the expression for this force.

13. What is sky wave communication? Why is this mode of propagation restricted to
the frequencies only upto few MHz?

14. In the given circuit, assuming point A to be at zero potential, use Kirchhoff’s rules
to determine the potential at point B. 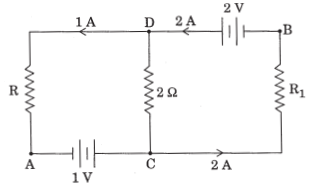 15. A parallel plate capacitor is being charged by a time varying current. Explain briefly
how Ampere’s circuital law is generalized to incorporate the effect due to the
displacement current.

16. Net capacitance of three identical capacitors in series is 1

F. What will be their net capacitance if connected in parallel?
Find the ratio of energy stored in the two configurations if they are both connected
to the same source.

17. Using the curve for the binding energy per nucleon as a function of mass number A, state clearly how the release in energy in the processes of nuclear fission and nuclear fusion can be explained. 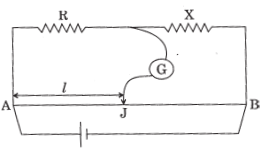 20. Draw a plot showing the variation of photoelectric current with collector plate potential
for two different frequencies, v1 >v2, of incident radiation having the same intensity.
In which case will the stopping potential be higher? Justify your answer.

21. Write briefly any two factors which demonstrate the need for modulating a signal.
Draw a suitable diagram to show amplitude modulation using a sinusoidal signal as
the modulating signal.

22. Use the mirror equation to show that
(a) an object placed between f and 2f of a concave mirror produces a real image
beyond 2f.
(b) a convex mirror always produces a virtual image independent of the location
of the object.
(c) an object placed between the pole and focus of a concave mirror produces
a virtual and enlarged image.

24. (a) Using de Broglie’s hypothesis, explain with the help of a suitable diagram,
Bohr’s second postulate of quantization of energy levels in a hydrogen atom.
(b) The ground state energy of hydrogen atom is – 13.6 eV. What are the kinetic
and potential energies of the electron in this state?

25. You are given a circuit below. Write its truth table. Hence, identify the logic operation
carried out by this circuit. Draw the logic symbol of the gate it corresponds to.

A giant refracting telescope at an observatory has an objective lens of focal length
15 m. If an eyepiece lens of focal length 1.0 cm is used, find the angular magnification
of the telescope.
If this telescope is used to view the moon, what is the diameter of the image of the
moon formed by the objective lens? The diameter of the moon is 3.42 x 106 m and
the radius of the lunar orbit is 3.8 x 106 m.

27. Two heating elements of resistances R1 and R2 when operated at a constant supply of voltage, V, consume powers P1 and P2 respectively. Deduce the expressions for the power of their combination when they are, in turn, connected in (i) series and
(ii) parallel across the same voltage supply.

28. (a) State the principle of the working of a moving coil galvanometer, giving its
labelled diagram.
(b) “Increasing the current sensitivity of a galvanometer may not necessarily
increase its voltage sensitivity.” Justify this statement.
(c) Outline the necessary steps to convert a galvanometer of resistance RG into
an ammeter of a given range.

29. State the working of a.c. generator with the help of a labelled diagram. The coil of an a.c. generator having N turns, each of area A, is rotated with a constant angular velocity

. Deduce the expression for the alternating e.m.f. generated in the coil.
What is the source of energy generation in this device?

(a) Show that in an a.c. circuit containing a pure inductor, the voltage is ahead of current by

/2 in phase.
(b) A horizontal straight wire of length L extending from east to west is falling with speed v at right angles to the horizontal component of Earth’s magnetic field B.
(i) Write the expression for the instantaneous value of the e.m.f. induced in
the wire.
(ii) What is the direction of the e.m.f.?
(iii) Which end of the wire is at the higher potential?

(a) State Huygens’ principle. Using this principle explain how a diffraction pattern is obtained on a screen due to a narrow slit on which a narrow beam coming from a monochromatic source of light is incident normally.
(b) Show that the angular width of the first diffraction fringe is half of that of the central fringe.
(c) If a monochromatic source of light is replaced by white light, what change would you observe in the diffraction pattern?