CBSE Question Paper 2011 Class 12 History conducted by Central Board of Secondary Education, New Delhi in the month of March 2011. CBSE previous year question papers with the solution are available in the myCBSEguide mobile app and website. The Best CBSE App for students and teachers is myCBSEguide which provides complete study material and practice papers to CBSE schools in India and abroad.

1. Mention the two sections of the Harappan Settlements and give one main feature of each.

2. How had Bemier described a complex social reality of the artisans under the Mughals ? Give anyone reason.

3. Mention the two earliest Bhakti Movements of Tamil Nadu, giving the main difference between them.

4. Mention the significance of census operation undertaken by the British in India.

5. When Gandhiji returned to India in 1915 he observed a few changes in India. Mention any two such changes.

6. Critically examine the duties as laid downin’Manusmriti’ for the Chandals.

7. Describe briefly how do the historians usually classify the contents of Mahabharata? Why is the text described as an itihas?

8. “The mid-first millennium BCE is often regarded as a turning point in the World History.” Justify the statement.

9. Describe the teachings of the Buddha.

10. “Krishnadeva Raya’s rule was characterized by expansion and consolidation. Justify the statement on the basis of evidence.

11. Describe briefly the expansion and consolidation of the Mughal Empire under Jalaluddin Akbar (1556-605).

13. Explain the impact of American Civil War of 1861 on Indian peasants.

14. “The annexation of Awadh displaced not just the Nawab but also dispossessed the taluqdars of the region, causing break down of an entire social order.” Critically examine the statement.

15. Explain briefly the difference between town and countryside in the pre-colonial period.

16. “Some scholars see partition as a culmination of communal politics.” Examine the statement.

17. How were the Panchayats formed during the sixteenth and seventeenth centuries? Explain their functions and authorities.

Explain the origin, consolidation and the role of zamindars in the villages. Were they an exploitative class?

Read the following extracts (Q. Nos. 19 to 21) carefully and answer the questions that follow:

19. The Malabar Coast (Present-day Kerala) Here is an excerpt from Periplus of the Erythraean Sea, composed by an anonymous Greek sailor(c.first century CE):
They (i.e. traders from abroad) send large ships to these market-towns on accountofthegreatquantityandbu1kofpepperandma1abathrum(possib1ycinnamon, produced in these regions). These are imported here, in the first place, a great quantity of coin; topaz ……. antimony (a mineral used as a coloring substance), coral, crude glass, copper, tin,1ead……. There are exported pepper, which is produced in quantity in only one region near these markets ……. Besides this, there are exported great quantities off me pearls, ivory, silk cloth,……. transparent stones of all kinds, diamonds and sapphires and tortoiseshell. Archaeological evidence of bread-making industry, using precious and semi-precious stones, has been found in Kodumanal (Tamil Nadu). It is likely that local traders brought the stones mentioned in the Periplus from sites such as these to the coastal ports.
(1) Explain the importance of the Malabar Coast.
(2) How did the exchange of goods take place? Explain with example.
(3) Explain the working of the bead making industry.
(4) Who used these land and river routes?

The importance of boundaries

The Manusmrti is one of the best-known legal texts of early India, written in Sanskrit and compiled between c. second century BCE and c. second century CE. This is what the text advises the king to do:
Seeing that in the world controversies constantly arise due to the ignorance of boundaries, he should… have… concealed boundary markers buried – stones, bones, cow’s hair, chaff, ashes, potsherds, dried cow dung, bricks, coal, pebbles, and sand. He should also have other similar substances that would not decay in the soil buried as hidden markers at the Intersection of boundaries.

(1) Why did the controversies of boundaries arise? Explain.
(2) Suggest the ways to solve the boundary problems.
(3) Explain with example any such problem being faced by India today.

20. Dehli Here is an excerpt from Ibn Battuta’s account of Delhi,  often spelled as Delhi in texts, of the period

The city of Delhi covers a wide area and has a large. population…

The rampart round the city is without parallel. The breadth of its Wallis eleven cubits; and inside it are houses for the night sentry and gatekeepers. Inside the ramparts, there are store-houses for storing edibles, magazines, ammunition, ballistas and siege machines. The grains that are stored (in these ramparts) can last for a long time, without rotting… In the interior of the rampart, horsemen, as well as infantrymen, move from one end of the city to another.

The rampart is pierced through by windows which open on the side of the city, and it is through these windows that light enters inside. The lower part of the rampart is built of stone; the upper part of bricks. It has many towers close to one another. There are twenty-eight gates of this city which are called Darwaza, and of these, the Budaun Darwaza is the greatest; inside the Mandwi Darwaza there is a grain market; adjacent to the Gu1 Darwaza there is an orchard… It(the city of Dehli) has a fine cemetery in which graves have domes over them, and those that do not have a dome, have an arch, for sure. In the cemetery, they sow flowers such as tuberose, jasmine, wild rose, and flowers blossom there in all seasons 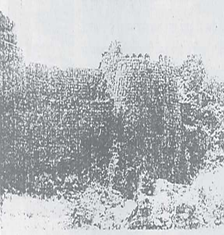 Fig: Part of the fortification wall of the settlement
(1) How had Ibn Battuta described the cities in the Sub-Continent?
(2) What was his description of Delhi?


OR
The Poor Peasant

An excerpt from Bernier’s description of the peasantry in the countryside:
Of the vast tracts of country constituting the empire of Hindustan, many are little more than sand, or barren mountains, badly cultivated and thinly populated. Even a considerable portion of the good land remains untitled for want of laborers; many of whom perished in consequence of the bad treatment they experience from Governors. The poor people, when they become incapable of discharging the demands of their rapacious lords, are not only often deprived of the means of subsistence, but are also made to lose their children, who are carried away as slaves. Thus, it happens that the peasantry, driven to despair by so excessive a tyranny, abandon the country.
In this instance, Bernier was participating in contemporary debates in Europe concerning the nature of state and society and intended that his description of Mughal India would serve as a warning to those who did not recognize the “merits” of private property.

(1)How have the tracts of Hindustan been described by Bernier?
(2)Why did the land remain untilled? Explain.
(3)What happens when the poor peasants are unable to fulfill the demands of their landlords?

21. ”No, no! You can never be ours”
This is the third story the researcher related:
I still vividly remember a man I met in Lahore in 1992. He mistook me to be a Pakistani studying abroad. For some reason he liked me. He urged me to return home after completing my studies to serve the qaum(nation). I told him I shall do so but, at some stage in the conversation, I added that my citizenship happens to be Indian. A11ofasuddenhistonechanged, and much as he was restraining himself, he blurted out. “Oh Indian! I had thought you were Pakistani.” I tried my best to impress upon him that I always see myself as South Asian. “No, no! You can never be ours. Your people wiped out my entire village in 1947, we have sworn enemies and shall always remain so.”
(1) What did the person advise the researcher who met him in Lahore in 1992? Why did he say like this? Explain.
(2)How did the person react on knowing that the researcher was an India?
(3)What did the Indian try to explain?
(4)Who was right and why? Explain.

The Muslim League Resolution of 1940
The League’s resolution of 1940 demanded:
that geographically contiguous units are demarcated into regions, which should be so constituted, with such territorial readjustments as may be necessary, that the areas in which the Muslims are numerically in a majority as in the north-western and eastern zones of India should be grouped to constitute “The Independent States” in which the constituent units shall be autonomous and sovereign.

22. On the given political outline map of India label the following:

23. On the given political outline map of India, five important places of the Revolt of 1857 have been marked as 1, 2, 3, 4, 5. Identify them and write their names on the lines drawn near them.

Mention the names of any five territories/cities under Babur, Akbar, and Aurangzeb.

23. Mention the names of any five centers of Indian National Movement. 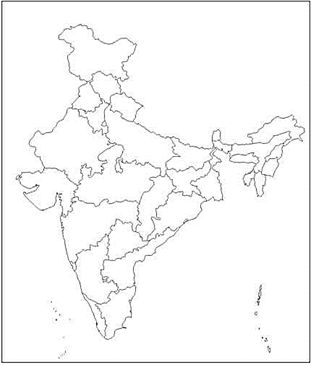