CBSE Question Paper 2011 Class 12 Geography conducted by Central Board of Secondary Education, New Delhi in the month of March 2011. CBSE previous year question papers with the solution are available in the myCBSEguide mobile app and website. The Best CBSE App for students and teachers is myCBSEguide which provides complete study material and practice papers to CBSE schools in India and abroad.

1. Which continent has the highest growth rate of population?

2. Which country has the lowest sex ratio in the world?

3. Name the two activities on which the earliest human beings were dependent for their sustenance.

4. What is a household industry?

5. Give the significance of river St. Lawrence as an inland waterway.

6. Give the meaning of human settlement.

7. What is the contribution of India in the production of rice in the world?

8. Name the first major seaport of India developed after independence.

9. Which sector of economy accounted for the highest percentage of India’s total value of exports in 2003-2004?

10. Name the two metropolitan cities which are the main polluters of river Ganga before it reaches Varanasi.

11. Explain the concept of determinism’ with suitable examples.

12. Divide the population of the world into two groups on basis of residence. How do they differ from each other? Explain any two points of difference.

13. What is the importance of’dairy farming’? Why is it mainly practised near urban and industrial centres of the wor1d? Explain any two reasons.

14. Study the table and answer the questions that follow:

(14.1) Which decade shows the highest increase of total value of imports and exports of goods and services?

Note: The following question is for the BLIND CANDIDATES only, in lieu of Q. No. 14:

15. Mention the famous oil pipeline of the U.S.A. How are pipelines one of the most convenient mode of transport? Explain any four points.

16. Why are ports ca11ed’gateways of international trade’? Explain any three reasons.

17. Explain any three factors that determine the type of rural settlements in India.

18. Study the given diagram and answer the questions that follow: 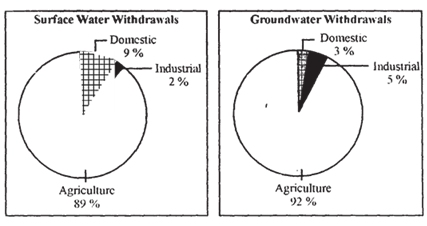 (18.1 ) Which sector accounts for most of the groundwater utilisation? Give one reason.

(18.2) Why is the share of water utilization in domestic sector lower in groundwater as compared to surface water?

Note: The following question is for the BLIND CANDIDATES only, in lieu of  Q. No. 18 :

Why is the demand of water for irrigation increasing day by day in India? Explain any three reasons.

19. Explain any three major objectives of the ‘New Industrial Policy’ of India, which was announced in 1991.

20. Describe any three major problems related to water in India.

21. ”Services are very important aspect for economic development of a country.” Analyse the statement by explaining five components of a service sector.

23. Explain with examples the occupational structure of India’s population.

25. Definetheterm’RoadDensity’. Explain with examples the two main determinants of road density in India.

26. (26.1) In the given political Outline Map of the World, the following four features are shown:

(A) The major area of commercial livestock rearing. (B) The major Sea Port: (C) The major AirPort. (D) The Mega City

Identify these features and write their correct names on the lines marked near each feature.

(26.2) In the given political Outline Map of India, locate and label the following with appropriate symbols:

(i) The State having lowest density of population. (ii) The oil refinery located in West Bengal. (iii) The major seaport located in Goa.

Note: The following questions are for the BLIND CANDIDATES only, in lieu of

(26.1) Name any one major seaport located on the western coast of North America.
(26.2) Name the coastal Megacity of Brazil.
(26.3) Which state of India has the lowest density of population?
(26.4) Name the oil refinery located in West Bengal.
(26.5) Which is the major seaport in Goa? 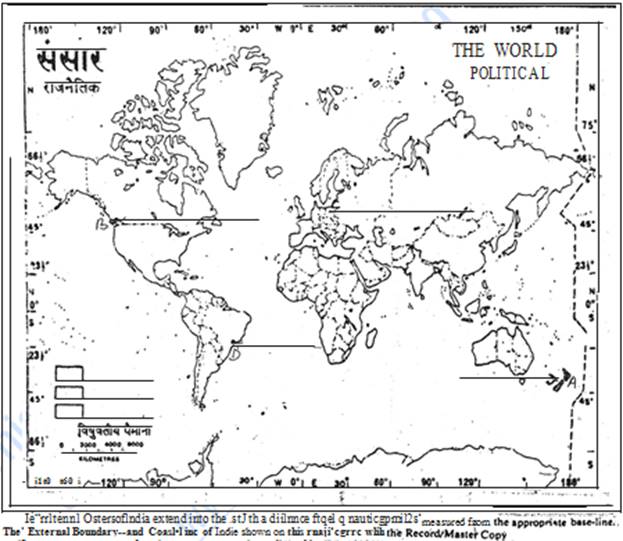 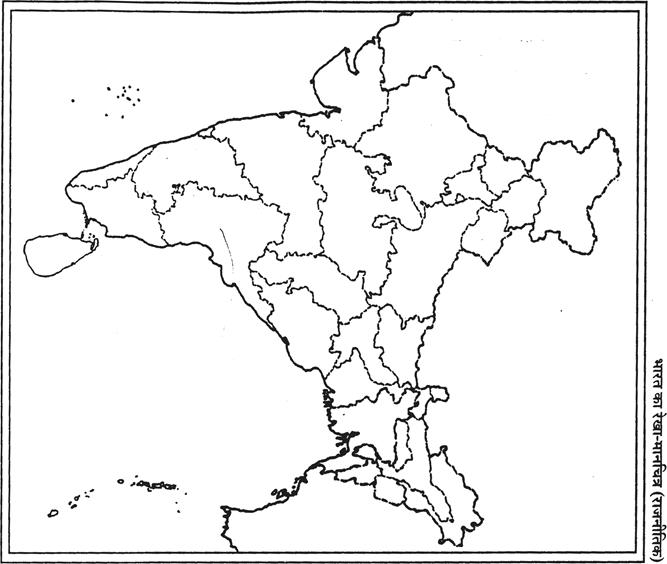