CBSE Question Paper 2011 class 12 Biology conducted by Central Board of Secondary Education, New Delhi in the month of March 2011. CBSE previous year question papers with solution are available in myCBSEguide mobile app and cbse guide website. The Best CBSE App for students and teachers is myCBSEguide which provides complete study material and practice papers to cbse schools in India and abroad.

1. Name the embryonic stage that gets implanted in the uterine wall of a human female.

2. State the importance of biofortification.

3. Biotechnologists refer to Agrobacterium tumifaciens as a natural genetic engineer of plants. Give reasons to support the statement.

4. How do algal blooms affect the life in water bodies?

5. Name the common ancestor of the great apes and man.

7. Mention the contribution of genetic maps in human genome project.

8. Name the phase all organisms have to pass through before they can reproduce sexually.

9. Name the enzyme produced by Streptococcus bacterium. Explain its importance in medical sciences.

10. How is ‘Rosie’ considered different from a normal cow? Explain.

11. State the use of Biodiversity in modern agriculture.

12. Write the full form of VNTR. How is VNTR different from ‘Probe’?

13. Differentiate between benign and malignant tumours. 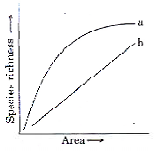 The above graph shows Species-Area relationship. Write the equation of the curve ‘a’ and explain.

Differentiate between in situ and ex situ approaches of conservation of biodiversity.

15. The cell division involved in gamete formation is not of the same type in different organisms. Justify.

Identify the type of the given ecological pyramid and give one example each of pyramid of number and pyramid of biomass in such cases.

18. Name the type of bioreactor shown. Write the purpose for which it is used.

19. Draw a labelled diagram of the reproductive system in a human female.

20. Branching descent and natural selection are the two key concepts of Darwinian Theory of Evolution. Explain each concept with the help of a suitable example.

21. Scientists have succeeded in recovering healthy sugarcane plants from a diseased one.

(a) Name the part of the plant used as explant by the scientists.

(b) Describe the procedure the scientists followed to recover the healthy plants.

22. (i) Name the enzyme that catalyses the transcription of hnRNA.

(ii) Why does the hnRNA need to undergo changes? List the changes hn RNA undergoes and where in the cell such changes take place.

23. (i) Write the scientific names of the two species of filarial worms causing filariasis.

(ii) How do they affect the body of infected person(s)?

(iii) How does the disease spread?

24. Name the genus to which baculoviruses belong. Describe their role in the integrated pest management programmes.

25. Unambiguous, universal and degenerate are some of the terms used for the genetic code. Explain the salient features of each one of them.

26. Water is very essential for life. Write any three features both for plants and animals which enable them to survive in water scarce environment.

How do organisms cope with stressful external environmental conditions which are localised or of short duration?

27. (i) State the consequence if the electrostatic precipitator of a thermal plant fails to function.
(ii) Mention any four methods by which the vehicular air pollution can be controlled.

28. Give reasons why:
(i) most zygotes in angiosperms divide only after certain amount of endosperm is formed.
(ii) groundnut seeds are exalbuminous and castor seeds are albuminous.
(iii) Micropyle remains as a small pore in the seed coat of a seed.
(iv) integuments of an ovule harden and the water content is highly reduced, as the seed matures.
(v) apple and cashew are not called true fruits.

(a) Draw a labelled diagram of L.S. of an embryo of grass (any six labels). 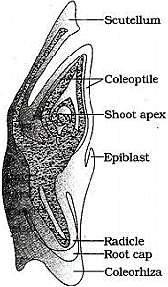 (b) Give reason for each of the following:
(i) Anthers of angiosperm flowers are described as dithecous.
(ii) Hybrid seeds have to be produced year after year.

29. Describe the mechanism of pattern of inheritance of ABO blood groups in Hum

(a) Why is haemophilia generally observed in human males? Explain the conditions under which a human female can be haemophilic.

30. (i) Describe the characteristics a cloning vector must possess.

(ii) Why DNA cannot pass through the cell membrane? Explain. How is a bacterial cell made ‘competent’ to take up recombinant DNA from the medium?

If a desired gene is identified in an organism for some experiments, explain

the process of the following:

(i) Cutting this desired gene at specific location

(ii) Synthesis of multiple copies of this desired gene