CBSE Question Paper 2011 class 10 Social Science conducted by Central Board of Secondary Education, New Delhi in the month of March 2011. CBSE previous year question papers with solution are available in myCBSEguide mobile app and cbse guide website. The Best CBSE App for students and teachers is myCBSEguide which provides complete study material and practice papers to CBSE schools in India and abroad.

(i) The question paper has 36 questions in all. All questions are compulsory.

(ii) Marks are indicated against each question.

(iii) Questions from serial number 1-16 are multiple choice questions (MCQs) of1 mark each. Every MCQ is provided with four alternatives. Write the correct alternatives in your answer book.

(iv) Question from serial number 17to29 are 3 marks questions. Answer of the questions should not exceed 80 words each.

(v) Question from serial number 30 to 34 are 4 mark questions. Answer these questions should not exceed 100 words each.

(vii) Attach the filled-up maps inside the answer-sheet.

1. Which one of the following statements is false regarding the Act of Union 1707?

(A) It was an agreement between England and Scotland.

(B) It was an agreement between England and Ireland.

(C) It resulted in the formation of the ‘United Kingdom of Great Britain.’

Which one of the following was not an impact of the Great Depression of l930’s on Vietnam?

(A) Vietnam was occupied by Japan.

(B) The price of rice and rubber fell.

(C) There was an increase in unemployment.

(D) There were rural uprisings.

2. Which one of the following statements is false regarding the Zollverein formed in 1834?

(A) It abolished trade barriers.

(B) It reduced the number of currencies.

(C) It had most of the German states as members.

Which one of the following statements is false about HO Chi Minh?

(A) Ho Chi Minh was the Chairman of the Democratic Republic of Vietnam.

(B) He founded the Vietnamese Communist Party.

(C) He took control of South Vietnam after Vietnam split.

(D) He gave help to the National Liberation Front.

3. Why did Gandhiji withdraw the Non-Co-operation Movement?

(A) Gandhiji realised that people were losing interest in the movement.

(B) Gandhiji felt the movement was turning violent in many places.

(C) Some Congress leaders wanted to participate in elections to Provincial Council.

4. Which one of the following statement is false about Alluri Sitaram Raju?

(A) He claimed he had special powers.

(B) He was inspired by the non-co-operation movement.

(C) He believed in the principle of non-violence advocated by Gandhiji.

(D) He persuaded people to give up drinking.

5. Which one of the following is the finest quality of iron ore?

6. Limestone is the basic raw material for which one of the following industries?

(A) Iron and steel industry

7. Which one of the following countries is giving stiff competition to India with regard to jute industry?

8. The first class mail includes which one of the following?

9. Backward and Minorities Community Employees Federation (BAMCEF) is an example of which one of the following?

(B) A movement for equality

10. Which one of the following was the main aim of the movement in Nepal in 2006?

(A) To reduce the power of the king.

(B) To re-establish democracy in Nepal.

(C) To promote one party rule.

11. Which one of the following political parties seeks to represent and secure power for Dalits, OBC’s and Adivasis?

12. Which one of the following is a foundational challenge of democracy?

(B) Keeping military away from controlling government.

(C) Extension of federal principle to all the units of the federation.

13. Why do banks keep a small proportion of the deposits as cash with themselves?

(A) To extent loan to the poor.

(B) To extend loan facility.

(C) To pay salary to their staff.

(D) To pay the depositors who might come to withdraw money.

14. The currency notes on behalf of the Central Government are issued by whom?

(A) State Bank of India

(B) Reserve Bank of India

15. Globalisation does NOT involve which one of the following?

(A) Rapid integration between countries.

(B) More goods and services moving between countries.

(D) Movement of people between countries for jobs, education etc.

16. The district level court deals with the cases involving claims:

17. Explain any three beliefs of the conservatism that emerged after 1815.

Explain any three features of the “go east movement” in Vietnam.

18. Explain any three facts about the new economic situation created in India by the First World War.

19. How is energy an indispensable requirement of our modern life? Explain with three examples.

20. How does textile industry occupy a unique position in Indian economy? Explain giving any three points.

21. “The sugar mills are shifting towards southern and western states of India.” Support the statement giving three reasons.

23. How do democratic governments ensure transparency? Explain any three points.

24. Explain any three characteristics of democracy.

25. Explain with examples why some laws that seek to ban something are not very successful in politics.

26. Explain the three conditions that determine MNC’s setting up production in other countries.

27. Explain the role of government to make globalisation fair.

29. Consumers have the right to be informed about goods and services they purchase. Explain its three advantages.

30. Explain any four economic hardships that Europe faced in the 1830s.

Explain the views of Paul Bernard regarding the economy of Vietnam.

31. How did cultural processes help in creating a sense of collective belongingness in India? Explain.

33. Explain any Your suggestions to reform political parties in India.

34. Describe any four advantages of ‘Self Help Groups’ for the poor.

35. Two features – A and B are marked in the given outline political map of India. Identify these features with the help of the following informational and write their correct names on the lines marked on the map.

(A) The place where Indian National Congress session of December 1920 was held.

Locate and label the following items with appropriate symbols on the same map.

(i) Amritsar— The place where Jalianwala Bagh incient took place.

(ii) Champaran —The place of the indigo planters’ movement.

Note: The following questions are for the BLIND CANDIDATES only, in lieu of Question No. 35.

(35.1) Name the place where the Indian National Congress session was held in December, 1920.

36. Three features —A, B and C are marked in the given outline political map of India. Identify these features with the help of the following information and write their correct names on the lines marked in the map.

Locate and label the following items on the same map with appropriate symbols.

Note: The following questions are for the BLIND CANDIDATES only, in lieu of Question No. 36.

(36.1) Name the southern terminal station of the North South Corridor.

(36.2) In which state is the Rawat Bhata Nuclear power plant located? 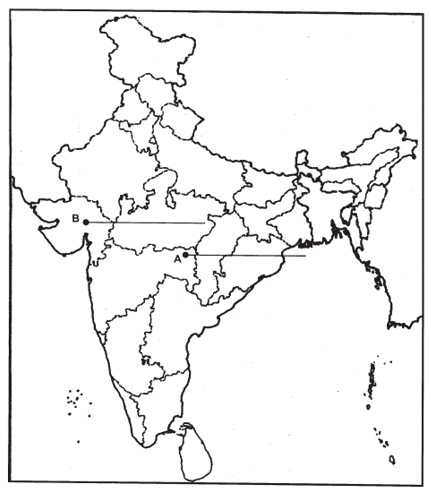 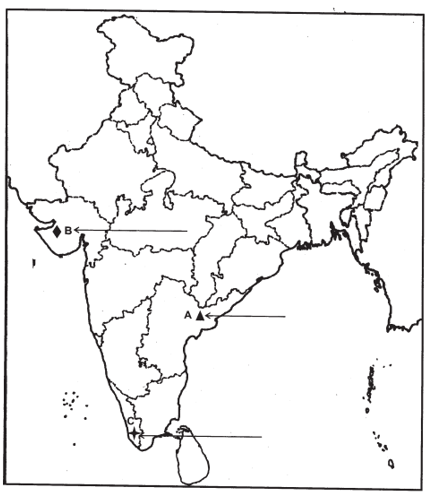