CBSE Question Paper 2010 class 12 Physics conducted by Central Board of Secondary Education, New Delhi in the month of March 2010. CBSE previous year question papers with solution are available in myCBSEguide mobile app and cbse guide website. The Best CBSE App for students and teachers is myCBSEguide which provides complete study material and practice papers to cbse schools in India and abroad.

1. Name the physical quantity whose S.I. unit is JC–1. Is it a scalar or a vector quantity?

2. A beam of a particles projected along + x-axis, experiences a force due to a
magnetic field along the + y-axis. What is the direction of the magnetic field? 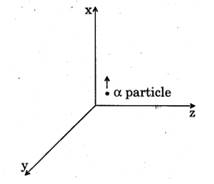 3. Define self-inductance of a coil. Write its S.I. unit.


5. Define ionization energy. What is its value for a hydrogen atom?

6. Two conducting wires X and Y of same diameter but different materials are joined in series across a battery. If the number density of electrons in X is twice that in Y, find the ratio of drift velocity of electrons in the two wires.

7. Name the part of electromagnetic spectrum whose wavelength lies in the range of
10–10 m. Give its one use.


8. When light travels from a rarer to a denser medium, the speed decreases. Does this decrease in speed imply a decrease in the energy carried by the light wave? Justify your answer.


9. Deduce the expression for the magnetic dipole moment of an electron orbiting around the central nucleus.


10. A spherical conducting shell of inner radius r1 and outer radius r2 has a charge ‘Q’. A charge ‘q’ is placed at the centre of the shell.

(a) What is the surface charge density on the (i) inner surface, (ii) outer surface
of the shell?
(b) Write the expression for the electric field at a point x > r2 from the centre of
the shell.

11. Draw a sketch of a plane electromagnetic wave propagating along the z-direction.
Depict clearly the directions of electric and magnetic fields varying sinusoidally
with z.


12. Show that the electric field at the surface of a charged conductor is given by

where σ is the surface charge density and

is a unit vector normal to
the surface in the outward direction.

13. Two identical loops, one of copper and the other of aluminum, are rotated with the same angular speed in the same magnetic field. Compare

(i) the induced emf and

(ii) the current produced in the two coils. Justify your answer.

14. An α-particle and a proton are accelerated from rest by the same potential. Find
the ratio of their de Broglie wavelengths.

15. Write two factors justifying the need of modulating a signal.

A carrier wave of peak voltage 12 V is used to transmit a message signal. What should be the peak voltage of the modulating signal in order to have a modulation index of 75%?

16. Write Einstein’s photoelectric equation. State clearly the three salient features
observed in photoelectric effect, which can be explained on the basis of the above
equation.

17. Draw a plot of potential energy of a pair of nucleons as a function of their separation. Write two important conclusions which you can draw regarding the nature of nuclear forces.

Draw a plot of the binding energy per nucleon as a function of mass number for a
large number of nuclei, 2 < A < 240. How do you explain the constancy of binding
energy per nucleon in the range 30 < A < 170 using the property that nuclear force
is short-ranged?

18. (i) Identify the logic gates marked P and Q in the given logic circuit.

19. Which mode of propagation is used by short wave broadcast services having
frequency range from a few MHz upto 30 MHz? Explain diagrammatically how
long distance communication can be achieved by this mode. Why is there an upper
limit to frequency of waves used in this mode?

21. A network of four capacitors each of 12 µF capacitance is connected to a 500 V
supply as shown in the figure. Determine (a) equivalent capacitance of the network
and (b) charge on each capacitor. 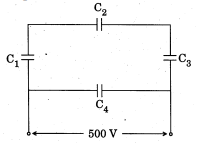 23. In Young’s double slit experiment, the two slits 0.15 mm apart are illuminated
by monochromatic light of wavelength 450 nm. The screen is 1.0 m away from the
slits.
(a) Find the distance of the second (i) bright fringe, (ii) dark fringe from the central
maximum.
(b) How will the fringe pattern change if the screen is moved away from the slits?

24. State Kirchhoff’s rules. Use these rules to write the expressions for the currents I1, I2 and I3 in the circuit diagram shown. 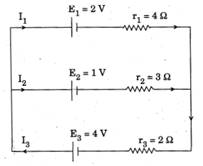 25. (a) Write symbolically the β– decay process of P.
(b) Derive an expression for the average life of a radionuclide. Give its relationship
with the half-life.

26. How does an unpolarised light get polarised when passed through a polaroid?
Two polaroids are set in crossed positions. A third polaroid is placed between the
two making an angle θ with the pass axis of the first polaroid. Write the expression
for the intensity of light transmitted from the second polaroid. In what orientations
will the transmitted intensity be (i) minimum and (ii) maximum?

27. An illuminated object and a screen are placed 90 cm apart. Determine the focal
length and nature of the lens required to produce a clear image on the screen, twice
the size of the object.

28. (a) With the help of a diagram, explain the principle and working of a moving coil
galvanometer.
(b) What is the importance of a radial magnetic field and how is it produced?
(c) Why is it that while using a moving coil galvanometer as a voltmeter a high
resistance in series is required whereas in an ammeter a shunt is used?

(a) Derive an expression for the force between two long parallel current carrying
conductors.
(b) Use this expression to define S.I. unit of current.
(c) A long straight wire AB carries a current I. A proton P travels with a speed v, parallel to the wire, at a distance d from it in a direction opposite to the current as shown in the figure. What is the force experienced by the proton and what is its direction? 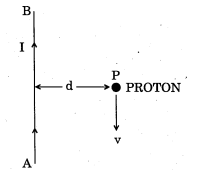 29. State Faraday’s law of electromagnetic induction.
Figure shows a rectangular conductor PQRS in which the conductor PQ is free to
move in a uniform magnetic field B perpendicular to the plane of the paper. The field
extends from x = 0 to x = b and is zero for x > b. Assume that only the arm PQ
possesses resistance r. When the arm PQ is pulled outward from x = 0 to x = 2b
and is then moved backward to x = 0 with constant speed v, obtain the expressions
for the flux and the induced emf. Sketch the variations of these quantities with distance 0 < x < 2b. 5 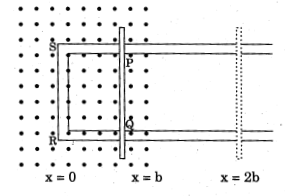 Draw a schematic diagram of a step-up transformer. Explain its working principle.
Deduce the expression for the secondary to primary voltage in terms of the number
of turns in the two coils. In an ideal transformer, how is this ratio related to the
currents in the two coils?
How is the transformer used in large scale transmission and distribution of electrical
energy over long distances?

(b) What is a light emitting diode (LED)? Mention two important advantages of LEDs over conventional lamps.