CBSE Question Paper 2010 Class 12 History conducted by Central Board of Secondary Education, New Delhi in the month of March 2010. CBSE previous year question papers with the solution are available in the myCBSEguide mobile app and website. The Best CBSE App for students and teachers is myCBSEguide which provides complete study material and practice papers to CBSE schools in India and abroad.

1. How was Buddha’s presence shown through symbols? Give two examples.

2. Mention the factors that accounted for the constant expansion of agriculture during the 16th and 17th centuries.

3. Mention the two most striking features about the geographical location of Vijayanagar.

4. Why were the hill stations important for the colonial economy? Give any two reasons.

5. Mention two characteristics of the neo-Gothic style of architecture for public buildings.

7. “Communication along both land and riverine routes, was vital for the existence of the Mauryan empire.” Justify the statement.

9. “Buddhism grew rapidly both during the life time of the Buddha and also after his death.” Justify the statement.

11. Describe briefly what the buildings that survive tell us about the way, spaces were organized and used in Vijayanagar.

12. “Many consider Jalaluddin Akbar (1556-1605) as the greatest of all the Mughal emperors.” Support the statement with evidence.

13. Critically examine the experiences of injustice felt by the ryots on the refusal of

moneylenders to extend loans to them after 1830.

14. How did the rebels in 1857 try to materialize their vision of unity? Explain briefly.

15. Why were the towns, built by the Mughals, during the 16th and 17th centuries famous

for? Explain with examples.

16. Explain how the demand for Pakistan was formalized gradually.

17. Explain the teachings of Kabir. How did he describe the ultimate reality through his poems?

He described the ultimate reality in the following manner:

c) He used words like ‘shabda’, ‘shunya from Vedic traditions

Who were lingayats ? Explain their contribution to the social and religious fields with

special reference to the caste system.

Explain how Gandhiji had transformed Indian Nationalism by 1922.

Read the following extracts (Q. Nos. 19-21) carefully and answer the questions that follow:

19.“Proper” social roles
Here’ is a story from the Adi Parvan of the Mahabharata :
Once Drona, a Brahmana who taught archery to the Kuru princes, was approached by Ekalavya, a forest-dwelling nishada (a hunting community). When Drona, who knew the dharma, refused to have him as his pupil, Ekalavya returned to the forest, prepared an image of Drona out of clay, and treating it as his teacher, began to practice on his own. In due course, he acquired great skill in archery. One day, the Kuru princes went hunting and their dog, wandering in the woods, came, upon Ekalavya. When the dog smelt the dark nishada wrapped in black deerskin, his body caked with dirt, it began to bark. Annoyed, Ekalavya shot seven arrows into its mouth. When the dog returned to the Pandavas, they were amazed at this superb display of archery. They tracked down Ekalavya, who introduced himself as a pupil of Drona. Drona had once told his favorite student Arjuna, that he would be unrivaled amongst his pupils. Arjuna now reminded Drona about this. Drona approached. Ekalavya, who immediately acknowledged and honored him as his teacher. When Drona demanded his right thumb as his fee, Ekalavya unhesitatingly cut it off and offered it. But thereafter, when he shot with his remaining fingers, he was no longer as fast as ‘he had been before. Thus, Drona kept his word: no one was better than Arjuna.

(1) Do you think Drona’s action was justified? Explain.
(2) Examine the story and explain the character of Ekalavya.
(3) After giving his thumb to Drona did he (Ekalavya) repent? Explain your opinion.

Draupadi is supposed to have asked Yudhisthira whether he had lost himself before staking her. Two contrary opinions were expressed in response to this question. One, that even if Yudhisthira had lost himself earlier, his wife remained under his control, so he could stake her. Two, that an unfree man (as Yudhisthira was when he had lost himself) could not stake another person. The matter remained unresolved; ultimately, Dhritarashtra restored to the Pandavas and Draupadi their personal freedom.
(1).Explain the message that goes after reading this episode.
(2).Which of the two views, do you agree? Support with your arguments.
(3) .Compare the status of women at that time and at present.

20. Classification of lands under Akbar

The following is a listing of criteria of classification excerpt from the Ain :
Emperor Akbar in his profound sagacity classified the lands and fixed a different revenue to be paid by each. Polaj island which is annually cultivated for each crop in succession and is never allowed to lie fallow. Parauti island left out of cultivation for a time that it may recover its strength. Chachar island that has lain fallow for three or four years. Banjar is land uncultivated for five years and more. Of the first two kinds of land, there are three classes, good, middling, and bad. They add together the produce of each sort, and’ the third of this represents the medium produce, one-third part of which is exacted as the Royal dues.

(1) Explain briefly the classification of lands by Akbar.

(2) How the revenue was fixed for the first two type of lands?

(3) Suggest some other way as you feel better.

This is what Jawaharlal Nehru said in his famous speech of 13 December 1946 :
My mind goes back to the various Constituent Assemblies that have gone before and of what took place at the making of the great American nation when the fathers of that nation    met and fashioned out a Constitution which has stood the    test of so many years, more than a century and a half, and  of the great nation which has resulted, which has been built upon the basis   of that Constitution. My mind goes back to that mighty revolution which took place also over 150 years ago and to that Constituent Assembly that met in that gracious and lovely city of Paris which has fought so many battles for freedom, to the difficulties than that Constituent Assembly had and to how the King and other authorities came in its way, and still it continued.
The House will remember that when these difficulties came and even the room for a meeting was denied to the then Constituent Assembly, they betook themselves to an open tennis court and met there and took the oath, which is called the Oath of the Tennis Court. that they continued meeting in spite of Kings, in spite of the others and did not disperse till they had finished the task they had undertaken. Well, I trust that it is in that solemn spirit that we too are meeting here and that we, too, whether we meet in this chamber or other chambers, or in the fields or in the market-place, will go on meeting and continue our work till we have finished it.

(1) How was the American Constitution finalized and explain its results?

(2) What does Nehru’s determination to pass The Constitution Show? Explain

any two such difficulties that were faced by the Constituent Assembly.

Well, Sir, I must congratulate Pandit Nehru for the fine expression he gave to

be accepted by the Indian people. Imposition would be resented and objected to,

he said, and he added that if need be we will walk the valley of struggle. That is very

But the point is to see when and how are you going to apply that challenge.

Well, Sir, the point is that the imposition is here right now. Not only has the British

Court or dance .attendance there in England; or to call on the British Prime Minister

Clement Attlee or someone else. Not only is it a fact that this Constituent Assembly,

whatever plans we may be hatching, but we are also under the shadow of British guns,

British Army, their economic and financial stranglehold – which means that the. final

decided, which means the future is not yet completely in our hands. Not only that,

need be, they will even threaten you with division entirely. This means, Sir, there is

no freedom in this country. As Sardar Vallabh Bhai Patel put it some days ago, we

have freedom only to fight among ourselves. That is the only freedom we have got.

Therefore, our humble suggestion is that it is not a question of getting something by

Interim Government, call upon the people of India, to stop fratricidal warfare and

look out against its enemy, which still has the whip hand, the British Imperialism and

go together to fight it ‘and then resolve our claims afterward when we will be free.

(2) Explain the intentions of the British in not framing the Constitution beforehand.

What did they want?

(3) Explain the views of Sardar Vallabh Bhai Patel on the issue.

22. On the given political outline map of India mark and label the following:
(i) Any two Harappan Sites.
(ii) Magadh, Kuru, Taxila

23. On the given political outline map of India five important places in South India during the 14th to 18th centuries have been marked as 1. 2. 3. 4. 5. Identify them and write their names on the lines drawn near them.

On the given political outline map of India five important places in South India during the 14th to 18th centuries have been marked as 1. 2. 3. 4. 5. Identify them and write their names on the lines drown near them.

Note: The following questions are only for the Blind candidates in the lie of map question

Mention five territories under British Control in 1857 in India.

23. Mention any five places in South India during the 14th to 18th century. 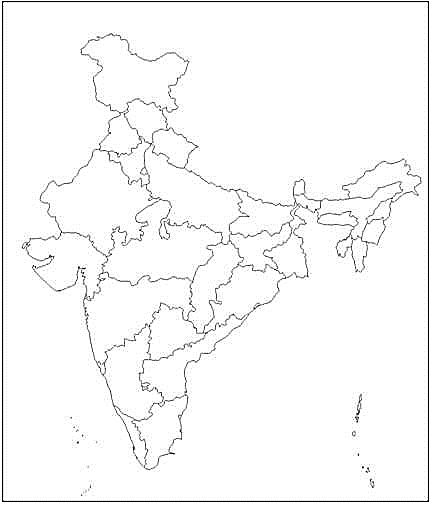