CBSE Question Paper 2009 class 12 Biology conducted by Central Board of Secondary Education, New Delhi in the month of March 2009. CBSE previous year question papers with solution are available in myCBSEguide mobile app and cbse guide website. The Best CBSE App for students and teachers is myCBSEguide which provides complete study material and practice papers to cbse schools in India and abroad.

Q1. The microscopic pollen grains of the past are obtained as fossils. Mention the characteristic of the pollen grains that makes it happen. 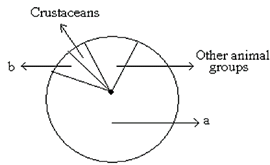 Name the unlabelled areas ‘a’ and ‘b’ of the pie chart (given above) representing the global biodiversity of invertebrates shoeing their proportionate number of species of major taxa.

Q3. Some allergens trigger sneezing and wheezing in human beings. What causes this type of response by the body?

Q4. Name the group of organisms and the substrate they act on to produce biogas.

Q5. Are the thorn of Bougainvillea and tendril of Cucurbita homologous or analogous? What type of evolution has brought such a similarity in them?

Q6. Mention the two additional processing which hnRNA needs to undergo after splicing so as to become functional.

Q7. Mention the pollinating agent of an inflorescence of small dull coloured flowers with well-exposed stamens and large feathery stigma. Give any one characteristic of pollen grains produced by such flowers.

Q8. Which of the following is a free-living bacteria that can fix nitrogen in the soil?
Spirulina, Azospirillum, Somalia 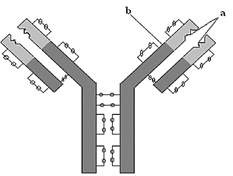 (i) What does the above diagram illustrate?
(ii) Name the parts labeled ‘a’ and ‘b’.
(iii) Name the type of cells that produce this molecule.

Q10. Name the muscular and the glandular layers of human uterus. Which one of these layers undergoes cyclic changes during menstrual cycle? Name the hormone essential for the maintenance of this layer.

Name the hormonal composition of the oral contraceptive used by human females. Explain how does it act as contraceptive.

Q12. Study the figure given below and answer the questions: 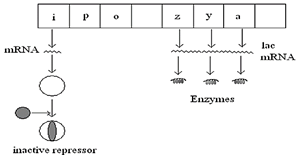 (a) How does the repressor molecule get inactivated?

(b) When does the transcription of lac mRNA stop?

(c) Name the enzyme transcribed by the gene ‘Z’.

Q13. Describe the responsibility of GEAC, set up by the Indian Government.

(b) How does the increase and the decrease in the value of ‘r’ affect the population size?

Q15. During the secondary treatment of the primary effluent how does the significant decrease in BOD occur?

Q16. How is the translation of mRNA terminated? Explain.

Q18. Explain the contribution of Thermus aquatics in the amplification of a gene of interest.

Q19. (a) Name the respective forms in which the malarial parasite gains entry into
(i) Human body and
(ii) Body of female Anopheles.

(b) Name the hosts where the sexual and the asexual reproductions of malarial parasite occur respectively.

(c) Name the toxin responsible for the appearance of symptoms of malarial in humans. Why do these symptoms occur periodically? 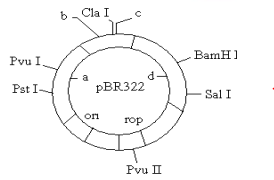 (a) Identify the selectable markers in the diagram of E. coli vector shown above.
(b) How is the coding sequence of αα – galactosidase considered a better marker than the ones identified by you in the diagram? Explain.

Q21. Haemophilia is a sex lined recessive disorder of humans. The pedigree chart given below shows the inheritance of haemophilia in one family. Study the pattern of inheritance and answer the questions given.

(a) Give all the possible genotypes of the members 4, 5 and 6 in the pedigree chart.

Q22. Construct an ideal pyramid of energy when 1, 000, 000 joules of sunlight is available. Label all its tropic levels.

Q23. Study the figure given below and answer the questions that follow: 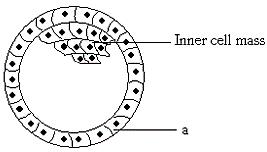 (a) Name the stage of human embryo the figure represents.
(b) Identify ‘a’ in the figure and mention its function.
(c) Mention the fate of the inner cell mass after implantation in the uterus.
(d) Where are the stem cells located in this embryo?

Q24. Explain the causes of global warming. Why is it a warning to mankind? 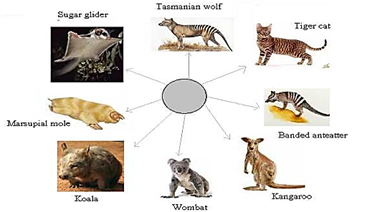 (a) Mention the specific geographical region where these organisms are found.

(b) Name and explain the phenomenon that has resulted in the evolution of such diverse species in the region.

(c) Explain given reasons the existence of placental wolf and Tasmanian wolf sharing the same habitat.

Q26. Draw a labeled schematic sketch of replication fork of DNA. Explain the role of the enzymes involved in DNA replication.

Q27. Name the pioneer species on a bare rock. How do they help in establishing the next type of vegetation? Mention the type of climax community that will ultimately get established.

Q28. (a) What did Meselson and Stahl observe when
(i) They cultured E. coil in medium containing 15NH4Cl for a few generations and centrifuged the content.
(ii) They transferred one such bacterium to the normal medium of NH4Cl and cultured for 2 generations?

(b) What did Meselson and Stahl conclude from this experiment? Explain with the help of diagrams.

(c) Which is the first genetic material? Give reasons in support of your answer.

You are given a red flower – bearing pea plant and a red flower bearing snapdragon plant. How would you find the genotypes of these two plants with respect to the colour of the flower? Explain the help of crosses. Comment upon the pattern of inheritance seen in these two plants.

Q29. (a) Draw a labeled diagram of a mature embryo sac.
(b) Why does a pollen grain posses two male gametes? Explain.

(a) Draw a schematic diagram of a human sperm and label the cellular components. Give the functions of any three parts.
(b) Where are the sperm heads found embedded to survive after spermatogenesis?

Q30. One of the main objectives of biotechnology is to minimize the use of insecticides on cultivated crops. Explain with the help of a suitable example how insect-resistant crops have been developed using techniques of biotechnology.

(a) How is mature insulin different from proinsulin secreted by pancreas in humans?
(b) Explain how was human functional insulin produced using rDNA technology.
(c) Why is the functional insulin thus produced considered better than the ones used earlier by diabetic patents?