CBSE Question Paper 2008 class 12 Physics conducted by Central Board of Secondary Education, New Delhi in the month of March 2008. CBSE previous year question papers with solution are available in myCBSEguide mobile app and cbse guide website. The Best CBSE App for students and teachers is myCBSEguide which provides complete study material and practice papers to cbse schools in India and abroad.

1. What is the direction of the force acting on a charged particle q, moving with a velocity

in a uniform magnetic field

2. Name the part of the electromagnetic spectrum of wavelength 10-2 m and mention its one application.

3. An electron and alpha particle have the same de-Broglie wavelength associated with them. How are their kinetic energies related to each other?

5. A 500 µ C Charge is at the centre of a square of side 10cm. Find the work done in moving a charge of 10 µ C between two diagonally opposite points on the square.

6. State the reason, why heavy water I generally used as a moderator in a nuclear reactor. How does the fringe width of interference fringes change, when the whole apparatus of Young’s experiment is kept in a liquid of refractive index 1.3?

7. The plot of the variation of potential difference across a combination of three identical cells in series, versus current is as shown below. What is the emf of each, cell?

8. Derive the expression for the electric potential at any point along the axial line of an electric dipole?

10. The oscillating magnetic field in a plane electromagnetic wave is given by

(i) Calculate the wavelength of the electromagnetic wave.

(ii) Write down the expression for the oscillating electric field.

11. Prove that an ideal capacitor, in an a.c. circuit does not dissipate power.

Derive an expression for the impedance of a.c. circuit consisting of an inductor and a resistor. 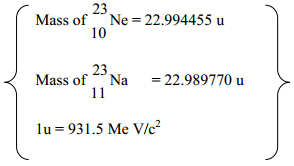 15. A ray of light passing through an equilateral triangular glass prism from air undergoes minimum deviation when angle of incidence is 3/4th of the angle of prism. Calculate the speed of light in the prism.

16. The give inputs A, B are fed to a 2-input NAND gate. Draw the output wave form of the gate. 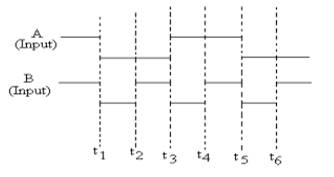 17. A transmitting antenna at the top of a tower has a height of 36m and the height of the receiving antenna is 49m. What is the maximum distance between them, for satisfactory communication in the LOS mode? (Radius of earth = 6400km)

18. How is a wavefront defined? Using Huygen’s construction draw a figure showing the propagation of a plane wave refraction at a plane surface separating two media. Hence verify Snell’s law of refraction.

19. A metallic rod of length l is rotated at a constant angular speedω, normal to a uniform magnetic field B. Derive an expression for the current induced in the rod, if the resistance of the rod is R.

20. The figure below shows the V-1 characteristic of a semiconductor diode. 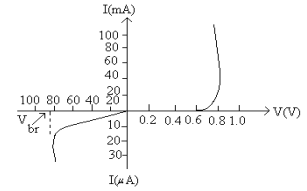 (i) Identify the semiconductor diode used.

(ii) Draw the circuit diagram to obtain the given characteristic of this device.

(iii) Briefly explain how this diode can be used as a voltage regulator.

(ii) current amplitude at this frequency

23. Prove that the current density of a metallic conductor is directly proportional to the drift speed of electrons.

A number of identical cells, n each of emf E, internal resistance r connected in series are charged by a d.c course of emf E’, using a resistor R.

(i) Draw the circuit arrangement.

(ii) Deduce the expressions for (a) the charging current and (b) the potential difference across the combination of the cells.

24. A potentiometer wire of length lm is connected to a drive cell of emf 3 V as shown in the figure. When a cell of 1.5 V emf is used in the secondary circuit, the balance point is found to be 60cm. On replacing this cell and using a cell of unknown emf, the balance point shifts to 80cm

(i) Calculate unknown emf of the cell.

(ii) Explain with reason, whether the circuit works, if the drive cell is replaced with a cell emf IV.

25. An electromagnetic wave of wavelength λ is incident on a photosensitive surface of negligible work function. If the photo-electrons emitted from this surface have the de-Broglie wavelength λ1, prove that λ =

26. The energy level diagram of an element is given below. Identify, by doing necessary calculations, which transition corresponds to emission of a spectral line of wavelength 102.7nm. 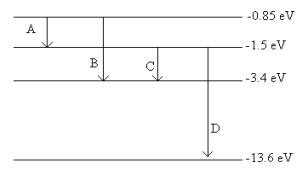 28. (a) Using Biot-Savart’s law, derive an expression for the magnetic field at the centre of a circular coil of radius R, number of turns N, carrying current i.

(b) Two small identical circular coils marked 1, 2 carry equal currents and are placed with their geometric axes perpendicular to each other as shown in the figure. Derive an expression for the resultant magnetic field at O. 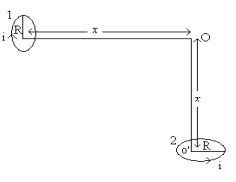 Draw a schematic diagram of a cyclotron. Explain its underlying principle and working, stating clearly the function of the electric and magnetic fields applied on a charged particle. Deduce an expression for the period of revolution and show that it does not depend on the speed of the charged particle.

= where ic is the critical angle of incidence for the media.

(b) Explain with the help of a diagram, how the above the principle is used for transmission of video signals using optical fibres.

(a) What is plane polarised light? Two polaroids are placed at 90o to each other and the transmitted intensity is zero. What happens when one more Polaroid is placed between these two, bisecting the angle between them? How will the intensity of transmitted light vary on further rotating the third Polaroid?

(b) If a light beam shows no intensity variation when transmitted through a polaroid which is rotated, does it mean that the light is unpolarised? Explain briefly.

30. (a) Using Gauss’ law, derive an expression for the electric field intensity at any point outside a uniformly charge thin spherical shell of radius R and charge density σ C /m2 Draw the field lines when the charge density of the sphere is (i) positive, (ii) negative.

(b) A uniformly charged conducting sphere of 2.5m in diameter has a surface charge density of 100 µC /m2 calculate the

(i) Charge on the sphere

(a) Derive an expression for the torque experienced by an electric dipole kept in a uniform electric field.

(b) Calculate the work done to dissociate the system of three charges placed on the vertices of a triangle as shown. 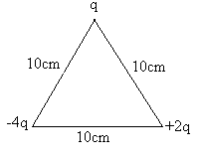