CBSE Question Paper 2008 Class 12 History conducted by Central Board of Secondary Education, New Delhi in the month of March 2008. CBSE previous year question papers with the solution are available in the myCBSEguide mobile app and website. The Best CBSE App for students and teachers is myCBSEguide which provides complete study material and practice papers to CBSE schools in India and abroad.

1. Give any two views about government and the rules of the Harappan society.

2. Who were Lingayats? Mention one idea that they challenged.

3. Why do thousands of devotees visit dargahs of Muslim saints?

4. Mention any two rumors spread by the people regarding the miraculous powers of Gandhiji.

5. Give any two reasons why the colonial government was keen on producing good maps.

6. Explain how access to property sharpened social differences between men and women in ancient times.

7.“Buddhist literature needs to be studied to understand the sculpture at Sanchi and other places.” Justify the statement with examples.

8. What, according to the Dharmashastras, were the ideal occupations for the four Varnas? Give one way in which the Brahmans tried to enforce these norms.

9. Describe how Buddha’s first journey into the outside world transformed his life.

10. Assess the importance of the painted image in Mughal manuscripts.

11. Explain why Ain-l-Akbari remains an extraordinary document of its times even today.

13.“The relationship between Pakistan and India has been shaped by the legacy of partition.” Give arguments in favor or against the statement.

15. Describe the alternative power structure that the rebels tired to establish during the Revolt of 1857.

16. Explain how the Constitution of India protects the rights of the Central government and the States.

17.Explain the importance of the ‘Sacred Centre’ in Vijayanagara with special emphasis on Gopurams and Mandapas

Explain the role of women in the agrarian society in Mughal India.

18. Explain why hill stations were a distinctive feature of colonial urban development.

Explain the different kinds of sources through which we come to know about Gandhiji. Give any two problems faced while interpreting them.

Read the following extract carefully and answer the questions (Questions 19 to 21) that follow:

In praise of Samudragupta

19.[This is an excerpt from the Prayaga Prashasti]

He was without an antagonist on earth; he, by overflowing of the multitude of (his) many good qualities adorned by hundreds of good actions, has wiped off the fame of other kings with the soles of (his) feet; (he is) Purusha (the Supreme Being), being the cause of the prosperity of the good and the destruction of the bad (he is) incomprehensible; (he is) one whose tender heart can be captured only by devotion and humility; (he is) possessed of compassion; (he is) the giver of many hundred thousands of cows; (his) mind has received ceremonial initiation for the uplift of the miserable, the poor, the forlorn and the suffering; (he is ) resplendent and embodied kindness to mankind; (he is) equal to (the gods) Kubera (the god of wealth), Varuna (the god of the ocean), Indra (the god of rains) and Yama (the god of death)….

(i)What is a Prashasti? Who wrote this Prashasti?
(ii)Given any four qualities of the rulers as mentioned in this Prashast.
(iii)Why did rulers identify themselves with a variety of deities?
(iv)Name two other sources for studying the Guptas.

Deadman Lane is a narrow alley, varying from 3 to 6 feet in width…. At the point where the lane turns westward, part of a skull and the bones of the thorax and upper arm of an adult were discovered, all in very friable condition, at a depth of 4 ft 2 in. The body lay on its back diagonally across the lane. Fifteen inches to the west were a few fragments of tiny skull. It is to these remains that the lane owes its name.

[From John Marshall, Mohenjo-Daro and the Indus Civilisation, 1931]

Sixteen skeletons of people with the ornaments that they were wearing, when they died, were found from the same part of Mohenjo-Daro in 1925.
(i)Why is the Lane called Deadman Lane?
(ii)What did some scholars and archaeologists conclude from this information?
(iii)Who was John Marshall and how did Marshall tend to excavate?
(IV)Why are earlier interpretations sometimes reversed?

20. The bird leaves its nest
[This is an excerpt from the Rihla] My departure from Tangier, my birthplace, took place on Thursday…. I set out alone, having neither fellow-traveler…nor caravan whose party I might join, but swayed by an overmastering impulse within me and a desire long-cherished in my bosom to visit these illustrious sanctuaries. So I braced my resolution to quit all my dear ones, female and male, and forsook my home as birds forsake their nests…. My age at that time was twenty-two years.
Ibn Battuta returned home in 1354, about 30 years after he had set out.
(i) What was Ibn Battuta’s desire that made him leave home?
(ii) Where did he travel before and after coming to India?
(iii) Why did he find traveling arduous in India?
(iv) What did he write about Indian cities?

21. I believe separate electorates will be suicidal to the minorities”
During the debate on 27 August 1947. Govind Ballabh Pant said:
I believe separate electorates will be suicidal to the minorities and will do them tremendous harm. If they are isolated forever, they can never convert themselves into a majority and the feeling of frustration will cripple them even form the very beginning. What is it that you desire and what is our ultimate objective? Do the minorities always want to remain as minorities or if they ever expect to form an integral part of a great nation and as such to guide and control its destinies? If they do, can they ever achieve the aspiration and that ideal if they are isolated from the rest of the community? I think it would be extremely dangerous for them if they were segregated from the rest of the community and kept aloof in an air-tight compartment where they breathe… the minorities, if they are returned by separate electorates, can never have any effective voice.

(i) What are separate electorates?
(ii) Why were some Muslims, like Begum Aizaz Rasul, against it?
(iii) Why did G.B. Pant feel separate electorates would be suicidal for the minorities?
(iv) Do you think that seats should be reserved for Muslims and other minorities in educational institutions? Give one argument for or against it.

21. On the given political outline map of India, mark, and name any five Harappan sites.

On the given political map of India, mark, and name any three territories an two cities under British control in 1857.

23. On the given political outline map of India, five centers of India National Movement have been marked as 1 to 5. Identify them and write their names on the lines drawn near them.

Note: The following questions are only for Blind candidates in lieu of the map questions (Q. 22 and 23).

22. Name any five Harappan sites or any three territories and two cities under British control in 1857. 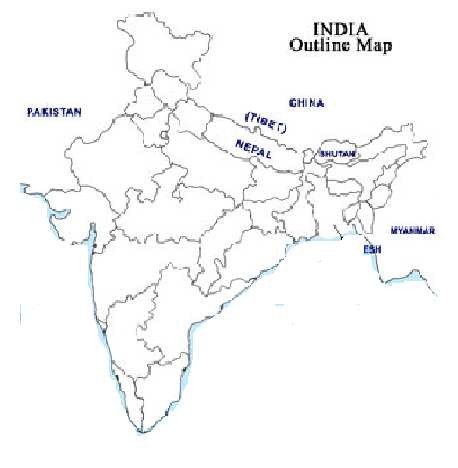