CBSE Question Paper 2008 class 12 Biology conducted by Central Board of Secondary Education, New Delhi in the month of March 2008. CBSE previous year question papers with solution are available in myCBSEguide mobile app and cbse guide website. The Best CBSE App for students and teachers is myCBSEguide which provides complete study material and practice papers to cbse schools in India and abroad.

2. Between amphibians and birds, which will be able to cope with global warming? Give reason.

3. Name the two type so cells in which the HIV multiplies after gaining entry into the human body.

5. What was the speciality of the milk produced by the transgenic cow Rosie?

6. Mention the polarity of the DNA strands a-b and c-d shown in the replicating for given below. 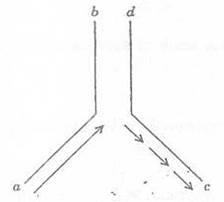 7. A multinational company outside India tried to sell new varieties of turmeric without proper patent rights. What is such an act referred to?

8. What is the economic value of Spirualina?

9. A plant of Antirrhinum majus with red flowers was crossed with another plant of the same species with white flowers. The plants of the F1 generation bore pink flowers. Explain the pattern of inheritance with the help of a cross.

A woman with blood group O married a man with AB group. Show the possible blood groups of the progeny. List the alleles involved in this inheritance.

10. Certain species of wasps are seen to frequently visit flowering fig trees. What type of
interaction is seen between them and why?

11. State the difference between the first trophic levels of detritus food chain and grazing
food chain.

12. How can DNA segments, separated by gel electrophoresis, be visualised and isolated?

13. Coconut palm is monoecious while date palm is dioecious. Why are they called so?

(b) Why is hormone releasing IUD considered a good contraceptive to space children?

16. How do sportsperson often fall a victim to cocain addiction?

17. DDT content in the water of a take that supplies drinking water to the nearby villages, is found to be 0.003 ppm. The kingfishers of that area are reported to have 2 ppm of DDT. Why has the concentration increased in these birds? What harm will this cause to
the bird population? Name the phenomenon.

18. Name the blank spaces a. b, c and d from the table given below:

20. Name the pathogen that cause amoebiasis in humans.Give the symtoms and the mode transmission of the disease.

Study the mRNA segment given above which is complete to be translated into a polypeptide chain.
(i) Write the codons ‘a’ and ‘b’.
(ii) What do they code for?
(iii) How is peptide bond formed between two amino acids in the ribosome?

22. How does Darwin’s theory of Natural Selection explain the appearance of new forms of
life on earth?

23. How is the bacterium Thermus aquaticus  employed in recombinant DNA technology?

DNA being hydrophilic cannot pass through the cell membrane of a host cell. Explain how does recombinant DNA get introduced into the host cell to transform the latter.

24. A factory’ drains its waste water into the nearby lake it has caused algal bloom,

(a) How was the algal bloom caused?
(b) What would be the consequences?
(c) Name the phenomenon that caused it.

(b) Specify the sources of the hormones mentioned in the graph. 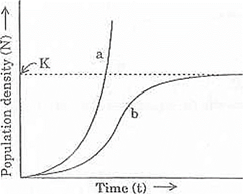 27. Explain the role of baculoviruses as biological control agents. Mention their importance in organic farming.

28. Explain the step involved in the production of genetically engineered insulin.
(a) Name thc nematode that infests and damages tobacco roots.
(b) How arc transgenic tobacco plants produced to solve this problem?

29. A tall pea plant with yellow seeds (heterozygous for both the traits) is crossed with a
dwarf pea plant with green seeds. Using a Punnett square work out the cross to show
the phenotypes and the genotypes of  F1 generation.

(a) Why is DNA molecule a more stable genetic material than RNA? Explain?
(b) “Unambiguous”, “degenerate” and “universal” are some of the salient features of genetic code. Explain?

30. (a) Draw a schematic labelled diagram of a fertilised embryo sac of an Angiosperms.
(b) Describe the stages in embryo development in a dicot plant.

(a) Draw a labelled diagram of a sectional view of human seminiferous tubule.
(b) Differentiate between gametogenesis in human males and females on the basis of
(i) time of initiation at the end of the process.
(ii) products formed at the end the process.