CBSE Question Paper 2007 Class 12 History conducted by Central Board of Secondary Education, New Delhi in the month of March 2007. CBSE previous year question papers with the solution are available in the myCBSEguide mobile app and website. The Best CBSE App for students and teachers is myCBSEguide which provides complete study material and practice papers to CBSE schools in India and abroad.

1. Explain briefly any two achievements of the Saiyid brothers.

2. Explain briefly any two causes for the growth of militant nationalism in the Indian National Movement.

3. Mention briefly any two basic principles of the Indian Constitution.

4.State the general condition of peasants during the first half of 19th century.

What made many of the peasants to join the Revolt of 1857?

5. Why was the Act of 1858 passed by the British Parliament? Explain three main features of this Act.

Explain the main three causes which led to the Nepal War of 1814. Also, explain any two main consequences of the war.

7. Critically evaluate the basis of struggle against the INA trial after the Second World War. Also, explain two main implications of the struggle.

Assess the significance of the Civil Disobedience Movement (1930-1934) to India’s struggle for independence.

8. Examine the main causes for launching the Non-Cooperation Movement. Why was the movement suspended in 1922?

Examine the main achievements of the Congress ministries of 1937. Mention two states where such ministries had been formed.

9. Explain any two reasons for the Anglo-French struggle in South India. Also, explain four causes for the success of the British in this struggle.

Why was Pitt’s India Act passed in 1784? Explain the main provisions of this Act.

10. What is meant by the system of separate electorates? When was the system introduced in India? Describe the main implications of the system

Describe how did foreign domination contribute to the rise of Indian nationalism in the late 19th century? Mention any two main nationalist organizations of the time.

11. Read the following passage and answer the questions that follow:
In a famous article in his weekly journal, ‘Young India’ Gandhiji wrote: “Non- violence is the law of our species, as violence is the law of the brute”, but that “where there is only a choice between cowardice and violence… I would rather have India resort to arms in order to defend her honor, than that she should, in a cowardly manner, become or remain a helpless witness to her own dishonor.”

11.1 In which context Gandhiji wrote this article?
11.2 When can one resort to violence according to Gandhiji?
11.3 What were Gandhiji’s ideas about non-violence?

What is referred to as the ‘Jallianwala Bagh massacre’? When did it take place? Describe its impact on the national movement.

12. On the given political outline map of India, mark, and name any five princely states in 1947. 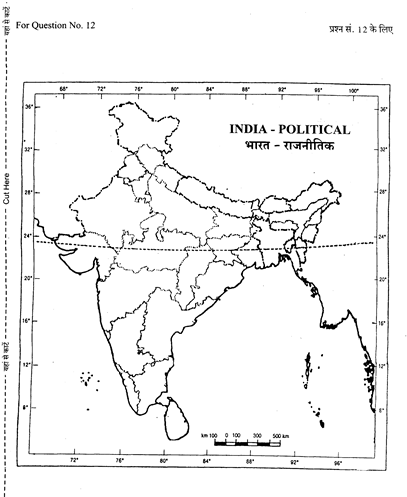 Note: The following question is only for the Blind Candidates in lieu of Q. No. 12.

Mention any five princely states in 1947.

Mention any five centers of the revolt of 1857. Contemporary World History

13. Mention any two points of the famous ‘Fourteen Points’ of peace proposal of Woodrow Wilson.

14. What was the ‘Phoney War’ with reference to the Second World War?

15. Mention any two changes that took place in the Soviet Union shortly after the death of Stalin.

16. Why was the invention of airplanes considered to be a breakthrough in the

field of science and technology?

Mention any two features of the renaissance in Asian literature.

17. When and by whom was the manifesto of the Communist Party written?

In what way has technology helped in the proper distribution of perishable goods in distant places?

18. Why was the exhibition of rejected paintings held in France in 1861?

How does the ability to split the atom spell disaster as well as prove a boon to mankind?

19. Explain the meaning of contemporary history and any three of its characteristics.

Explain the causes of the Russian revolution and two of its impacts on the world.

20. What was the Poland Question which led to the Second World War in September 1939? Why was Soviet Russia reluctant to help Poland?

What is meant by the ‘Negritude’ Movement? Explain any three main outcomes of this movement.

21. Critically examine the basis of the war in Korea soon after the Second World War and name two foreign countries involved in the war.

22. When did the US formally join the Second World War? Mention the incident which compelled her to join the war. Explain the US attitude to the war before joining.

Give the basic objectives of the Non-Aligned Movement as laid down at the first conference. What is the relevance of NAM today?

23. On the political outline map of Asia mark and name any five British colonies in 1914.

On the political outline map of Europe mark and name any two allied countries of Germany, two of Britain and one neutral country in 1914.

Note: The following question is only for the Blind Candidates in lieu of Q. No. 23. Mention any five British colonies in Asia in 1914. 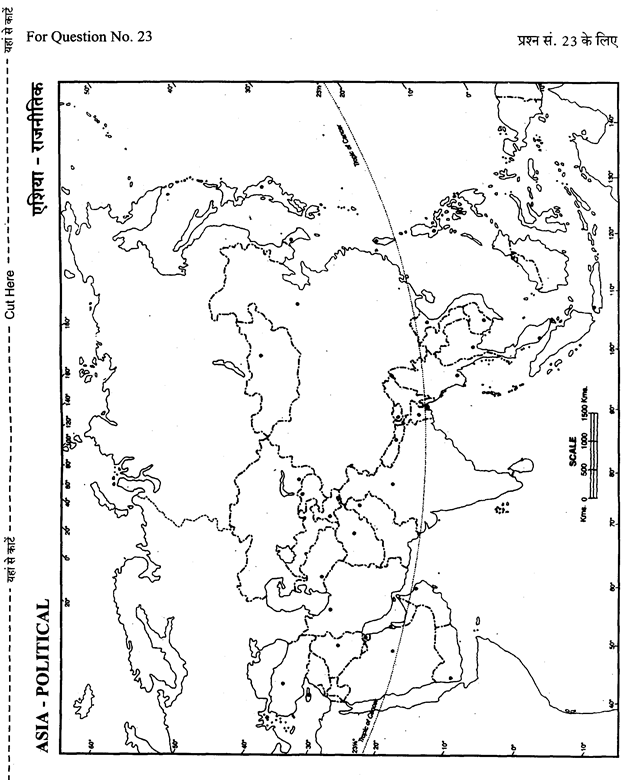 Mention any two allied countries of Germany, two of Britain and one neutral country in 1914. 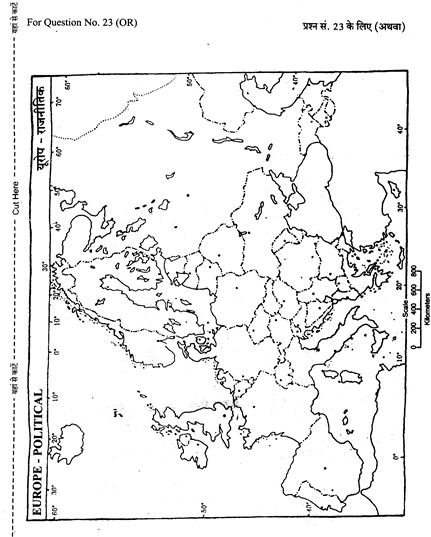