CBSE Question Paper 2005 Class 12 History conducted by Central Board of Secondary Education, New Delhi in the month of March 2005. CBSE previous year question papers with the solution are available in the myCBSEguide mobile app and website. The Best CBSE App for students and teachers is myCBSEguide which provides complete study material and practice papers to CBSE schools in India and abroad.

Q3. Who founded the Brahmo Samaj? Mention any one of its principal aims. (2)

Q4. Who founded the Arya Samaj ‘? Describe the role of Arya Samaj in the social awakening of India.

Discuss the main objectives of the East India Association founded in London Who founded the association? (1+4)

Q5. Explain three main reasons for the foundation of Indian National Congress in 1885 and name of the two Britishers who had helped in its foundation. (3+2)

What were the main demands of the Moderate nationalists? Mention their two main achievements.

Q6. Explain the importance of the revolutionary movements in the freedom struggle of India. (5)

Q7. Why was the Khilafat movement started? Explain its political significance. (5)

Explain the main aspects of the constitutional changes introduced in 1919. Examine the nationalist’s reactions to these changes. (3+2)

Q8. Explain any four achievements of the Congress ministry formed after 1937. Mention any two states where the Congress had formed ministries. (4+1)

What was the Mountbatten Plan? Explain its main outcome?

Q9. Examine the main reasons which prompted the Europeans to come to India during the 16th and 17th centuries. Explain how India was portrayed in European writings during the period. (5)

Explain any two main objectives of the East In4ia Company at the time of its foundation. Explain the main features of its structure and mention the British Governments relations with the company.

Q10. Describe the economic causes of the revolt of 1857 and mention any two revolts which preceded it. (6+2)

Why did the revolt of 1857 fail? Mention two Indian rulers who sided with the British during the revolt?

Q11. Critically analyze the nature of the freedom struggle in Goa. When Goa was finally liberated? (7+1)

Read the following passage and answer the questions that follow:

“In order to settle the issue immediately and prevent the slaughter of innocent people, the Congress decided to agree to the division of the country and demanded the partition of the Punjab and Bengal. This was no surrender to the Muslim League or policy of appeasement.”

Q12. On the given outline map (Political) of India locate and label the following as on 15th August 1947. (5)
a) Two French regions.
b) Two Portuguese regions
c) One Princely State

On the given outline map (Political) of India locate and label the following chief centers of Revolt of 1857.
a) Two centers in Karnataka
b) Two centers in Andhra Pradesh
c) One center in Kerala.

Q13. What is meant by the covenant of the League of Nations? (2)

Q14. Explain the meaning of blitzkrieg in the context of World War II. (2)

Q17. Mention the two indicators of an advanced society or a State? (2)

Q18. Mention any main characteristics of the Modern Japanese novel. (2)

Q19. Explain the meaning of Contemporary period in history. Mention how it is different from the modern period. (3+2)

Explain the basis of Anglo-French. Entente of 1904. Mention one of its main consequences. (4+1)

Q20. Describe the main reasons for the rise of Nazism in Germany. Mention one of its main outcome.

What led to the social crisis in Britain during the inter-war period? Mention when the women were given the right to vote there.  (4+1)

Q21. Critically analyze the success of the Communists in China in 1949. Mention the name of their main leader? (4+1)

Explain the post-II World War developments in Vietnam and assess the role of the United States of America in It. [5]

Q22. Explain the main developments during World War II which led to Germany’s surrender. Explain two main outcomes of her

Q23. On the given outline map of Europe locate and label five countries which actively participated in the World War I. (8)

On the given outline map of Europe, locate and label three neutral countries and two allied countries during World War II. 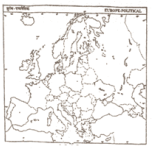